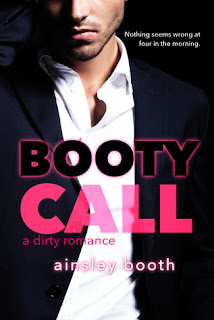 
I know what I’m doing when I text Scott at four in the morning.

He knows what I’m doing, too.

That’s why he shows up twenty-three minutes later, freshly showered with a condom in his pocket and a barely dissolved breath mint on his tongue.

I smirk as he looms over me. “You are such a dirty old man.”

“We need to stop doing this.”

“Because you’re twenty-one and I’m not. Because I want to take you on a f***ing date and you won’t. Because we wind up yelling at each other half the time.”

“But the rest of the time you’re inside me and it feels so good, right?”

His eyes darken and I don’t need to look down to know he’s hard for me.

Thoughts on Booty Call: Awwww, yasssss. Some hot lovin' between Scott and Ali. The bodyguard and the coed who's trying to live a normal life after the fallout from her father's actions. Actually, the fallout isn't all that bad. It's mostly in her head, but head-stuff can mess with a person.

What I'm trying to say is that Ali wants a normal life, but she worries that her proclivities (not that they were in any way bad or scandalous, mind you, she just wanted who she wanted and that was that) ... I don't know how to put it. Seeing what her father and mother are capable of makes her wary. And a wary Ali tries to control things in a way that has the potential to do a lot of damage to both her and Scott's hearts if they aren't careful.

Really, for all they both insist things aren't going to get deep for either of them, they fall HAAARRRRD for one another. It's great. I love when stubborn people fall. It's so delicious to watch.

Fun and sexy with an extra helping of sexy just because. These bodyguards are good. REALLY good.