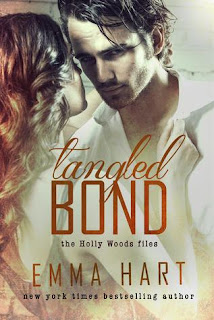 
One date with the sexier-than-sin Detective Drake Nash. Simple.

Until you take into account that my brother finally proposed to his girlfriend, so Nonna is on a warpath—and the crazy old bat has Cupid by the balls.

The upcoming mayoral elections has everyone running on full speed, and while I couldn’t give any less craps about the corrupt Holly Woods mayor’s office, a dead body in the middle of a campaign speech has me thrown right into the middle of it. The victim is close to the mayor, but all he cares about is minimizing the damage to his campaign, so he hires me to work alongside Drake to close the case as quickly as possible.

Bad news for our tentative relationship.

We disagree far more than we agree, but being at loggerheads won’t get this murder solved… Or deal with the arrival of someone from his past.

The mysteries behind the murder aren’t the only things unraveling, and despite being knee-deep in lies and corruption and bonds so tangled they’re almost indecipherable, I have to figure out if I’m willing to fight for Drake the way I do justice…

Or if he’ll be my one who gets away.

Thoughts on Tangled Bond: Oh, MAN. Noelle and Drake just can't help butting heads. Over everything. ANYTHING. Arguing is their special brand of foreplay and they don't hold back. Seriously. They go at it with both guns blazing. Possibly literally. I mean, Noelle definitely seems the type.

And the make-up nookie after those blazing fights? HAWT.

But this book isn't ONLY sparks and steam and snarling touches between Drake and Noelle. There's also the little matter of murder. Dead bodies have a tendency to pop up in Noelle's orbit and it drives Drake a little crazy. In part because he's the lead homicide detective and in part because he cares enough about Noelle to want her to stay safe.

Except Noelle's the type of person who rushes head first into danger if someone she cares about (or a client) is involved. While she's (generally) careful where she rushes in, she isn't about to hold back and let something bad happen when she has the power to stop it.

Gotta love a lady with a strong moral compass. Although her compass might be a little bent seeing as how she sometimes has to skirt around the law to get the answers she needs.

Anywho. Fun. Sassy. Sexy. A little dangerous. I LIKE.