Three of Us by Ella Goode [Review] 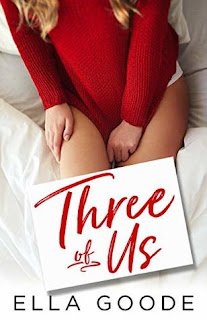 Three of Us
1. Three of Us - Kindle
2. Belong Together


Olivia is ready for two things: college and her men.

Despite dating the Audley twins since she was fifteen, it’s been a chaste relationship. No matter how she tries to tempt them.

Her men haven’t even kissed her, and she’s tired of waiting. The minute she hits campus where the two men have been hiding out for the last two years while somehow still keeping tabs on her every move, she will shake their world.

Levi and Zeke made a promise to Olivia’s mom they wouldn’t touch her until she was ready. They’re not sure what that means, but they know they will wait forever just to have her. The problem is that Olivia keeps testing their vows. It’s hard not to give your girl what she wants when that’s all you’ve ever wanted to do.

The minute the clock turns midnight, though, all bets are off.

Thoughts on Three of Us: One girl, two guys, complete and utter devotion on all their parts. Yeah, this one was cute. Sweet, even. Olivia felt terrible after she realized how difficult she was making it for her men when she kept trying to tempt them into breaking their promise and the twins absolutely never wavered in their devotion to her.

I also liked that Olivia had been so sheltered with the understanding of her town and her family that it never crossed her mind that being one of three in a relationship was odd. She never gave it a thought until a certain nasty someone pointed it out. The guys knew it wasn't going to be as easy as Olivia made it out to be, but they were also willing to protect her however they needed to.

Because that's what boyfriends do.