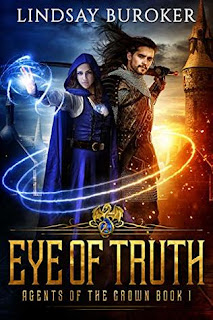 
After ten years at war, Jev Dharrow looks forward to hanging up his sword, relaxing with a cool mug of ale, and forgetting that the love of his life married another man while he was gone. But when his ship sails into port, a beautiful woman wearing the garb of an inquisitor from one of the religious orders waits to arrest him.

He’s accused of stealing an ancient artifact with the power to start another war. Jev would gladly hand over the artifact to stop more suffering, but he has no idea where it is or even what it looks like. The inquisitor woman definitely has the wrong person.

Inquisitor Zenia Cham grew up with nothing, but she has distinguished herself as one of the most capable law enforcers in the city, and she’s next in line to become archmage of the temple. All she has to do is find the Eye of Truth, and her superiors are certain that Jev has it.

He tries to charm her with his twinkling eyes and easy smile, but she’s not letting any man get between her and her dreams. Especially not a thief.

If Jev can’t convince Zenia they’re on the same side, find the artifact, and clear his name, his homecoming will turn into a jail sentence. Or worse.

Thoughts on Eye of Truth: I wasn't sure what kind of book I was in the mood for and then I picked this one up. It totally hit the spot and now I have to read the whole series. I don't make up the rules. That's just how it works.

So. Jev and Xenia. They're in very different places in their lives when they first cross paths. Partly because Xenia is sent to arrest Jev for a theft he didn't commit. Not that she knows that. She was given a job and she's darn well going to do it.

Except nothing is as it seems. Jev isn't the arrogant zyndar she's expecting. The artifact she's been sent to retrieve is...more than her superiors are admitting. And she's starting to wonder if she's doing the right thing by hunting it down. Or hunting him down.

As for Jev, after ten years at war, he's tired. He just wants to relax and get his bearings again and instead he's being accused of something he didn't do by a woman who intrigues him on a lot of different levels.