Beneath the Surface by Lindsay Buroker [Review] 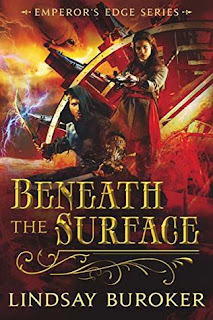 
All Sergeant Evrial Yara wanted was to protect the young emperor from those plotting to kill him. Joining forces with a group of notorious outlaws wasn’t part of the plan, especially not when one of them is determined to charm her out of her uniform at every turn. Working with the criminals might have been worth it if their efforts had saved the emperor, but it seems he’s not the rightful heir to the throne.... Evrial may have thrown away her career for nothing.

To make matters worse, fate isn’t going to give her time to calmly decide what to do next. While she’s traveling back to the capital with Amaranthe Lokdon and the rest of the outlaws, Evrial uncovers artifacts that have been smuggled aboard their steamboat. They’re deadly enough to threaten the entire city, perhaps the entire empire. Oh, and they could kill everybody on board the boat too. These scenarios just weren’t discussed in the Enforcer Academy.

Thoughts on Beneath the Surface: I'm just going to go on record as saying Sicarius showing emotion about ANYTHING, but especially Amaranthe (and around Amaranthe, I guess) makes me GIDDY. Apparently, a stone faced assassin finding his softer side is my thing, man. My thing.

Plus, the fact he's still Sicarius even when he's feeling those softer emotions is fantastic. He's still practically superhuman in some of the things he can do and he's a little socially off. I don't know what it is that delights me so much, but he fills me with happiness.

Even when he's killing people. Which might seem weird, but it's literally the thing he was trained to do since childhood and I can appreciate a person utilizing their gifts and training to the extent he does.

On to of Sicarius and Amaranthe giving me a happy, Yara is finally starting to melt a little around Maldynado. Or at least see he's not quite as foolish as he pretends to be. YAY!

A little danger. A little making out in smoke stacks. A little alone time under the stars. This is what I'm here for. Yesssss.