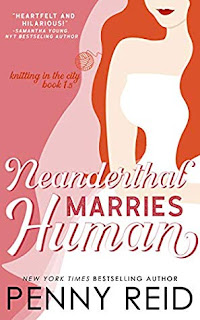 
There are three things you should know about Quinn Sullivan: 1) He is madly in love with Janie Morris, 2) He’s not above playing dirty to get what (or who) he wants, and 3) He doesn’t know how to knit.

After just five months of dating Janie, Quinn—former Wendell and unapologetic autocrat—is ready to propose marriage. In fact, he’s more than ready. If it were up to Quinn, he would efficiently propose, marry, and beget Janie with child all in the same day—thereby avoiding the drama and angst that accompanies the four stages of pre-matrimony: engagement, meeting the parents, bachelor/bachelorette party, and overblown, superfluous wedding day traditions.

But Janie, much to Quinn’s dismay, tosses a wrench in his efficacious endeavors and challenges him to prove his devotion by going through the matrimonial motions, no matter how minute and mundane.

Will Quinn last until the wedding day? Or will he yield to his tyrant impulses?

This book is not a standalone. It is the sequel to ‘Neanderthal Seeks Human,’ and is book #1.5 in the Knitting in the City series.

Thoughts on Neanderthal Marries Human: Man, I like Janie's wild mental wanderings. It turns out, Quinn likes them too. He's also perceptive enough to see how squirrely she is about committing to something long term after knowing each other for such a short time. So he makes plans to get her to see his side of things.

Plans which are kinda, sorta derailed/shunted in another direction when Janie agrees to an engagement but demands they pull out all the stops for their wedding.

While Janie's reasoning seems off the wall at first glance, it does sort of make sense. I mean, they'd known each other for such a short time it wouldn't hurt to see how they react as a couple when things get a little rough before tying the knot.

The good news is that the two definitely develop a good couple-dom plan while on this wild ride. They also break down some barriers and build a pretty freaking solid foundation for their future. And they so THINGS in Vegas. Well, Janie does things. Amusing things.

I loved seeing the other knitting ladies and I loved watching all the little interactions that will pay off in later books. *thumbs up*