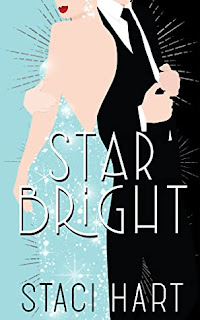 
Stella Spencer has one enemy—her secrets.

The world’s obsession with the Bright Young Things is real. Every lavish party thrown by the most exclusive group in New York is a spectacle, stalked not only by the media, but by the police commissioner, who’s declared war. He’s out to ruin everyone’s good time, starting with uncovering the mysterious benefactor leading the group, thus answering the question on everyone’s lips.

Who is Cecelia Beaton?

And no one knows it’s Stella.

If society finds out the truth, her plans will unravel. And with one smoldering look from a stranger, her carefully ordered world catches fire.

Levi Hunt has one plan—get the story.

His future at Vagabond magazine depends on his ability to do the one thing no one can: infiltrate the Bright Young Things. If he can find out who Cecelia Beaton is, he’ll earn enough notoriety to permanently secure his career.

His dreams are at his fingertips, so long as he doesn’t blow his cover. But one night with the brightest, most brilliant young thing of all, and he knows he’ll have to make a choice.

The job he loves or the woman of his dreams.

Secrets and lies. Love and laughter. And two people with something to hide and everything to gain.

Welcome to the party.

Thoughts on Star Bright: Oh my. Stella and her Bright Young Things were fantastic. And Levi...Oh, Levi. He might have tangled himself up initially with his deceptions, but the guy pulled through in the clutch and he was an OUTSTANDING foil for Stella's giving heart. Seriously, separately these two are great, but together they absolutely SHINE.

Let's start with Stella, shall we? On the surface, she looks like the epitome of the poor little rich girl. She has ridiculous buckets of money, glittering friends, and parents who are more worried about their reputation than her. She's a shining socialite who stands in the center of the decadent parties of the Bright Young Things. But she's also so much more than that. She's kind and sweet and she gives her heart without reservation even when she's trying to hold back. She knows getting involved with Levi isn't going to end well for her, but she does it anyway because he calls to her.

As for Levi, his seemingly easy deceptions about who he is and why he's at a BYT party turn complicated when he and Stella connect. The longer he holds the truth back, the bigger the explosion feels like it's going to be when everything comes out. And a truth like that can't be contained forever, so you KNOW the reveal is coming.

Throw in lavish parties, a police commissioner who has it out for Stella and her gang, and something darker swimming just under the surface and you've got a whole lot of incredible going on. I genuinely adore all Staci Hart's books and this one hit the spot in so many ways. Stella and Levi and EVERYONE were fantastic. I can't wait to see who gets top billing next.

Posted by Kelly Rubidoux at 8:00 AM