Too Many by Alexa Riley [Review] 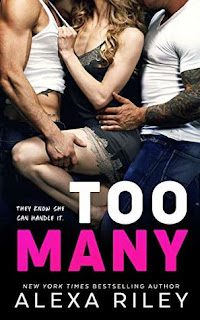 Connected Books:
Too Hard
Too Many - Kindle


Nellie has a desire so filthy she can’t say it out loud, but having two men at once was never on her radar until she met the twins. Now all she can think about is being sandwiched between Owen and Elijah. It’s all just a fantasy, because she could never have it in real life. Right?

Elijah and Owen have finally graduated college and are taking over the family business from their dad. The final step in creating the life they want is claiming Nellie. She’s the one they’ve been waiting on, and though she might be shy, they know she’s made to take them.

Warning: Can a woman really have too many men love her? We don’t think so! Grab the follow-up to Too Hard and find out if these three can find their happily ever after.

Thoughts on Too Many: Elijah, Owen, and Nellie were introduced in Harlow and Butch's book and you JUST KNEW these three were going to find their way together. I mean, Elijah and Owen were way into Nellie before she was even considering how to choose between the brothers.

Yep, she gets both and the three of them find a way to make things work. Not that there aren't bumps along the way, but a big chunk of them are in Nellie's mind (because threesomes aren't a thing normal people do, right?) and Elijah and Owen take the time to soothe all those fears the best way they know how.

YOU KNOW WHAT I'M TALKING ABOUT.