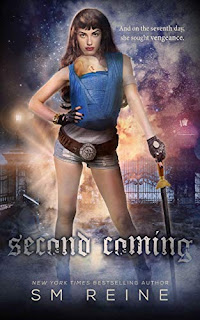 
Elise Kavanagh was once known as the Godslayer - a woman born to kill Adam, a man become God. But she defeated him and stepped into his role, taking her lifelong partner into the pantheon with her. Now she must navigate her mortal goals with her divine life, beginning with substantiating into an avatar to have James Faulkner's baby, and ending with vengeance.

Thoughts on The Second Coming: I read this serialized on S.M. Reine's website originally and I had forgotten how...disassociated Elise was with the baby in the beginning. Or...disconnected, maybe. I don't know. She was just not terribly maternal. Until she was.

Considering this is Elise we're talking about--badass godslayer and all around fierce lady--the fact she was maternal at all was...Wait. I can't say it's surprising. She might be blunt and quick to grab her sword, but she's fiercely protective of those who are her people. James might have been the one who first wanted a baby, but Elisa loves James and half of James went into that baby so she's kind of leaning toward at least half loving it just for that.

Okay. Enough about Elise and her maternal instincts. Let's talk about how CRAZY FIERCE she is while battling demons with a baby strapped to her back. Or front. Either way, the lady doesn't back down from a fight. And as things start to unfold and the stakes get higher, she just fights harder. Even when she's beaten and bloody. Even when she's mining her last reserves.

The Ascension series is full of insane dips and curves and switchbacks and this book keeps that streak alive. When the Godslayer walks, THINGS HAPPEN. Man, do they happen.