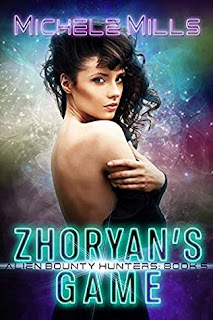 
He’s an arrogant, celebrity warlord who thinks marriage and snot-nosed children sound like the lowest level of hell.

She’s the filthy-mouthed daughter of a High Priest who wants LOTS OF KIDS.

When their deck explodes they rush into the same executive escape pod and eventually crash-land together on a mysterious planet. Without food and water. Without any way to communicate with their ship. And most importantly, without Zhoryan’s gloves of the unmated. The one item that will prevent testing of mating compatibility.

And then they find out why it’s called ‘Ship-Trap Planet.’

Will Zhoryan be able to resist touching this female’s bare skin while being hunted by the psychopath who owns the planet?

And will Janet learn to love such an unbearable @$$hole?

Because, one touch is all it takes…

Thoughts on Zhoryan's Game: Well. Our boy Zhoryan is NOT interesting in finding himself a mate and getting tied down with everything that comes part and parcel with it. Too bad for him, huh? Because when things get sticky, you do what you gotta do. Even if it means accidentally testing mating compatibility with a half-human female who you might like but maybe not, who knows.

To say Zhoryan is a wee bit arrogant in the beginning would be a slight understatement. He doesn't remember meeting the sister in law of one of his best friends even though they've met several times before. He just...doesn't see her. Until he does. Then things start to get heated.

On Janet's end, she's VERY aware of Zhoryan and his sexiness. But she thinks he's way out of her league and is resigned to being the forgotten sister. Well, sort of resigned. Then she and Zhoryan get stranded planet side and have to rely on one another for survival and THINGS HAPPEN.

You know, Zhoryan might not be a bounty hunter, but he's just a strong and determined as they are. And when he finds what he wants, he doesn't look back. GOOD TIMES!