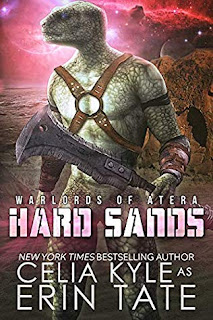 
She may be a gift from the Goddess, but he doesn’t want her. So why can’t he let her go?

Kalinda got on the Intergalactic Mating Agency’s ship with one destination in mind—a distant space station where she’s to meet her new mail order mate. Nothing in her plans includes crash-landing on a backwards, undiscovered, lizard-alien inhabited sand planet. Roughing it wasn’t what she signed up for and she wants off Atera. Well… maybe after she spends a little time with the Warlord Nakan, first. He’s a sexy, muscular, overwhelming gray-scaled presence that she wouldn’t mind exploring. But when she’s done with him, she’s figuring out a way off this godforsaken planet. She doesn’t belong on Atera no matter what the hottie lizardman may say.

Nakan does not have time in his life for a mate. With his sire recently deceased, he must care for his tribe and fight off challengers to his position as Warlord of the Hard Sands. A mate? And an alien human female, at that? No, he has other responsibilities that need his attention. Gift from the Goddess or not, Kalinda of Earth is not for him. It does not matter that her curves call to him or that her strange alien form appeals to him in ways no other female ever has and stirs his blood like a true mate.

Yet Nakan’s denial leaves Kalinda vulnerable. There’s a male who wants everything Nakan holds dear—his position of Warlord, the territory of the Hard Sands, and more important to him than anything else… Kalinda.

Thoughts on Hard Sands: It's the next Warlord's turn to find his special someone in the group of stranded human women. Turns out, Nakan is intrigued, but he's got a lot on his plate and doesn't pursue the attraction (you know, the fact she stirs his blood in the only way that's going to end up with him having a family in the future) until fate forces his hand.

Well, fate or an honorless competitor for his position as Warlord.

Yep, Kalinda stumbles into a not-so-fun situation and Nakan has to admit the truth. Except...no one's exactly told the human women about the whole mating for life thing and having it dumped on a girl can be overwhelming.

However, Kalinda's smart and she works through her upset about this new situation and the more time she spends with Nakan, the more she comes to admire him. And find him sexy. The fact he's a very *ahem* giving male helps.

A little despair to start out, a little danger along the way, and a strange, new world to learn about...yep, these human women are dealing with a lot. Fortunately for them, their new alien buddies are all about honoring these women from beyond the stars and treating them like the treasures they are.