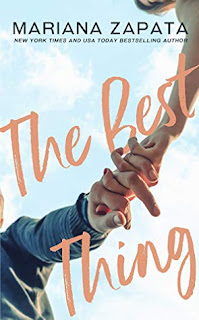 Connected Books
Luna and the Lie


Some things are easily forgiven. Other things… not so much.

Too bad no one gave Jonah Collins the memo.

Thoughts on The Best Thing: Okay, so Lenny is...she's kind of a concentrated ball of rage (although SHE claims she's totally not in the beginning, but...she kind of is) when we first meet her. (Actually, she was just crazy and OTT when we first met her in Luna's book. This rage thing is allllll from the events that led to her swearing off Jonah Collins and his good looks and hot body and the way he sucked her in with his sweetness and then let her down in the worst way possible.) The lady has a few issues she needs to confront so she can move on with her life and, unfortunately, Jonah is a champion at not giving her an opening to get things said.

To be fair, the guy had his reasons for dropping off the face of the earth and, once they do start talking (which takes a while), Lenny can appreciate the chain of events that led to her going all rage-y and such.

But it takes a while to get to that point.

Also to be fair, as angry as Lenny was, she didn't lash out and deny Jonah even before things got better. She tried to be mature and fair and she was and that gave them the chance to open up to one another and clear the air.

On Jonah's end, he knows he did wrong by Lenny and he steps up to try to make amends. Lenny throws him a curve ball or two along he way and he steps up to take responsibility to that, too. Which makes him pretty okay in my book despite that aforementioned dropping off the planet at the worst possible time.

Might I just add that a big, brawny man who's sweet and terribly shy and likes cuddling is one of my new favorite things. Jonah is a study in contrasts and it worked hard for him.

A little concentrated rage, a few Twilight references, a sweet man who made a mistake and does his best to make it up to the person who means the most to him, and an epilogue that killed me dead. It's a slow burn, baby, and it worked.