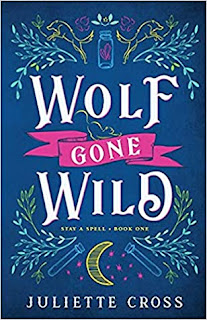 
What's the worst thing that can happen to a werewolf? Unable to shift for three months, Mateo Cruz knows all too well. His wolf has taken up residence in his head, taunting him night and day with vividly violent and carnal thoughts. Convinced he's cursed, he needs the help of a powerful witch before he literally goes insane.

Evie Savoie has always obeyed the house rules of her coven — no werewolves. They're known for being moody and volatile. So, when a distempered, dangerous werewolf strolls into the bar and almost strangles one of her late-night customers, she's ready to bounce him through the door. But the desperation in his eyes when he begs her to help him softens her heart and convinces her to bend the rules.

What Evie doesn't know is that Mateo's wolf has a mind of his own. And now that she's in his sights, he wants only one thing. Her.

Thoughts on Wolf Gone Wild: You know when you pick up a book and it just completely hits the spot? Like, it gave you everything you wanted and then some before you even knew those things were what you wanted? Yeah. Yeaaaaaah. Evie and Mateo worked for me. Hard.
She's the soft-hearted hex breaker and he's the sweet (albeit cursed) werewolf who's desperately in need of some TLC. And Evie's the only one both he and his wolf want giving them that TLC. Except the man is trying to hold himself in check while the wolf is just going all out. Or in, if he had his way about it. *finger guns*
BUT WAIT! THERE'S MORE! There's this whole vibrant world around them. There are Evie's sisters and Mateo's art and lots and lots of power the Savoie sisters have at their disposal. As powerful witches, the Savoies have an obligation to help where they can (even if they have to team up with certain people they *seemingly* can't stand *cough*JulesandRuben*cough*) and they're dedicated to doing just that. Even if it means taking on a werewolf with performance issues.
Yup, I liked this one. It was fun and flirty and I'm kinda digging hard on how the sisters have each others' backs when things go south. Even before then, really. I just...liked everything going on here. So much.