A Soupcon of Poison by Jennifer Ashley [Review] 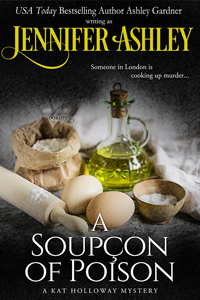 Kat Holloway Mysteries
0.5. A Soupcon of Poison - Kindle
1. Death Below Stairs
2. Scandal Above Stairs
3. Death in Kew Gardens
4. Murder in the East End
5. Death at the Crystal Palace


London, 1880. Kat Holloway, highly sought-after young cook to the wealthy of London, finds herself embroiled in murder when she’s accused of poisoning her employer, the loathsome Sir Lionel Leigh-Bradbury. Her only help as she works to clear her name comes from the mysterious Daniel McAdam, a handsome man-of-all-work who seems to know everyone and always happens to be in the right place at the right time. Kat and Daniel investigate the crime, but the mystery of Daniel’s background might be just as elusive and dangerous as the poisoner bent on framing Kat for murder.

Thoughts on A Soupcon of Poison: I'm reading this series slightly out of order, so it was fun to go back and see the beginnings of things. Kat and Daniel, for example. Her story is already a wee bit complicated (the tangled web of her previous marriage, for starters) and his is...shrouded in mystery, let's say. Yet, I like these two together. Despite the mystery and secrets and whatnot.

But this isn't ALL about Kat and Daniel's blossoming romance (or whatever you want to call it at this point). There's the small case of murder. And poison. And murder by poison. Which, as you can imagine, points a big finger at Kat as she was the cook for the meal that ended with two people dead.

Fortunately for Kat, she has friends who know the sort of woman she is and they team up to figure out what actually happened. (Side note: going before a judge kinda sucked in Kat's time. There wasn't a whole lot of wiggle room for, you know, getting to tell your side of the story. Not fun!)

I'm digging these stories about the reputable cook with a shrouded past and the people she accumulates through her fairness and kind heart. I also like Daniel and his knack for being in the right place at the right time. Good stuff!