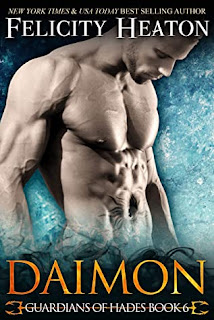 Daimon (Guardians of Hades #6) by Felicity Heaton
Format: ebook
Source: provided by the author for review
Disclaimer: As an Amazon Associate I earn from qualifying purchases.
Date read: September 23, 2020


Daimon is ice. His heart is frozen by it. His body caged by it. And he likes it that way. But the sexy sorceress that storms into his life and declares herself a part of his team in his battle against the daemon uprising is determined to melt the ice that has shielded him for centuries, and he’s powerless to stop the burning need she ignites in him.

Even when he’s sure it’s only a game to her.

Cassandra has a sword hanging over her, a duty she has no choice but to perform and one she’s been putting off for years. Her latest excuse? Helping a band of immortal brothers with a war that might mean the end of this world if they fail. Her delaying the inevitable has nothing to do with the gorgeous Greek god who keeps rebuffing her and everything to do with saving the world. He’s a nice distraction and nothing more. She keeps telling herself that.

Even when she’s sure he’s a danger to her heart.

As things heat up in the battle to save the mortal world and the Underworld, will Daimon’s icy heart be able to withstand the fiery witch who can scorch him with just a look?

Thoughts on Daimon: Oh, Daimon. The dude is not in a good place. His manifestation of power leaves him unable to touch anyone and he's a hot mess emotionally. Esher's disappearance into the Underworld just adds another burden onto the already heaping pile he's carrying around. Throw in some serious demon activity and a couple furies with chaos on their minds and things get a little hairy.
Like I said, he is NOT in a good place.
And Cass messes with his head. Big time. She pushes when others back off. She pokes and prods and makes him feel things and he's...well, he's not okay with it, but he's also not NOT okay with it. He's more angry at himself for feeling anything toward her than anything else.
Which makes for some SPARKS when these two butt heads. Sparks and ice floes and some serious steam.
The good news is when Daimon decides to go in, he goes ALL in. He's 100% behind Cass and will support her in every way he can. Even if it entails making some big decisions that will affect her life going forward. (Really, though, what did you expect when a witch hooks up with a mostly-god? THINGS HAPPEN, people. Things happen.)
Steamy kisses, a little mayhem, battles, gods, and an unexpected hint of hope that things might be less dire than (on one front) than the brothers thought. GODO STUFF!