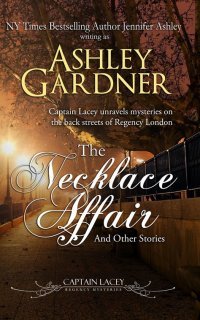 
Captain Lacey agrees to track down the missing necklace of a society matron and prove the innocence of her maid, who has been arrested for the theft. Lady Clifford declares that the rival for her husband's affections has stolen the necklace, but Lacey soon realizes that the problem is not so simple. He recruits Lady Breckenridge to infiltrate the Clifford household, while Lacey and his friend Lucius Grenville follow other leads. The investigation digs up scandal and past secrets, and Lacey finds himself competing with the underworld criminal, James Denis, for the necklace's retrieval.

Thoughts on The Necklace Affair: Captain Lacey and his well to-do friends (you know, the ones he enlists to help in his sleuthing endeavors) are on the case when a maid is wrongfully (he's told) accused of its theft. In all honesty, the people stuck in the middle of this particular debacle are...I dunno. Sad? Miserable? Both of the above?

They're just going through the motions, in some ways. Lady Clifford is miserably unhappy and her husband is not a nice person and everyone around them feels the backlash of their unhappiness. Sometimes in unexpected ways. The sad thing is I don't think the maid who was accused of theft had the worst of it.

Seriously, that household is just whacked. Captain Lacey might be dealing with his own heavy things, but he's so much more honorable than these people who have everything and use their station to demand and take what's not theirs.

But that's another story for another day. Captain Lacey is doing his thing with people he trusts to have his back. He's forthright and does what needs to be done to make things right as best he can.

(As an aside, I thought I'd read more in this series. I own several of these books, so I shall have to remedy that!)