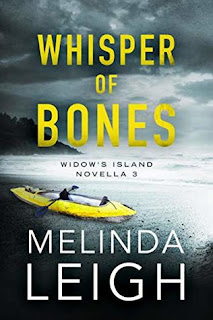 
Dark secrets from the past bob to the surface in the third novella in the Widow’s Island series.

When a body washes up on the state park beach, Deputy Tessa Black’s experience as a former Seattle detective tells her that the death was not an accident. All evidence points to another murder on the remote island.

The victim is a local contractor with a shockingly long list of enemies. The more locals Tessa interviews, the more people she suspects—from the bitter ex-wife and estranged current wife to disgruntled former clients and employees. They all have different reasons to want him dead.

As Tessa’s investigation heats up, arson and a vicious assault convince her the killer is desperate to hide his crime—and that she’d better solve the case before he claims another victim.

Thoughts on Whisper of Bones: Tessa (and her new honey) are on the case when a body is found on the beach. And while it all seems straightforward (or as straightforward as an investigation into the untimely death of one of the island's residents can be), Tessa is also still looking into the twenty year old disappearance of her childhood friend. And dealing with her mother's deteriorating mental state.

She kind of has a lot on her plate.

Fortunately, she has Logan and Cate (and the close-knit community of the island) to help her out.

While the focus of this book is mostly on the murder of the local, the investigation into Sam's disappearance takes a leap forward. Plus, Logan (sort of ) admits he's not doing as well as he thinks he should be. (Which is sort of par for the course with the Wilde siblings, but that's another story for another book.)

A little mayhem, a little murder, a little coming together between Tessa and Logan. Good stuff.