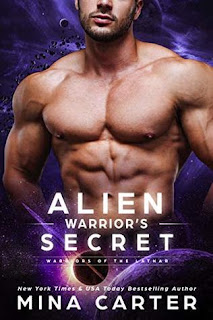 
Being captured by aliens is better than being sent home…

Pilot Randy Rivers always has had a sassy mouth. This time though, it’s not her mouth but her temper that lands her in trouble and given her marching orders home. That and apparently slamming a superior officer’s face into a table is a no no. Even if the guy is a misogynistic asshole. And groped her. Faced with the prospect of going back back to over-crowded earth with it’s slum-cities, she takes a high-stakes, off the book mission into the heart of enemy territory.

When things go sideways, she expects to end up as a prisoner of war, not holed up and kept secret from every one else on the ship by the sexiest alien guy. One who’s determined to prove that enemies can make the best lovers…

Sometimes love can be found in the most unexpected of places… like under a seating rack.

Riis K’Vass knew humans could be unpredictable and, frankly, insane, but even he didn’t expect them to try and sneak onto a heavily armed and armored warship, filled with a small army. They did though, and were easily captured. But, the numbers don’t add up, and Riis realizes that they’re missing one human. A female hiding in the tiniest of spaces, easily missed with how tiny human women are. A female who takes his breath away with her beauty and makes him smile with her stubbornness and intelligence.

Just a few days. At least, that’s what he tells himself. If he can keep her secret for long enough to get himself some mating marks and bond her to him, then they’ll never be able to take her away from him.

But jealous eyes are always watching and a warship is no place for keeping secrets. Especially where rare and coveted females are concerned. When Randy is discovered, Riis must fight for his life and a chance at a life with his little mate. Because mating marks don’t do a warrior any good if he’s dead…

Thoughts on Alien Warrior's Secret: Ahh, the Lathar. They know when they've found their special someone and they're pretty darn protective of them even against their brothers in arms. (For the record, it's been a while since I jumped into their world and circumstances have changed a bit for the humans and Lathar since those early books. In a good way. In a good way.)

Randy and Riis. She's the hot-headed pilot who doesn't know how to back down and he's the type of alien warrior she's been warned about. Except, you know, it doesn't seem like those warnings are exactly accurate. Because the Lathar aren't the enemy and they are SUPER protective of females.

Especially females who stir up their mating instincts.

A few close calls, a couple of sexy encounters, and a fight to keep them together. These Lathar might be aliens, but they're definitely compatible (both emotionally and physically) with the women they claim.