Fate of the Beast by Sonia Nova [Review] 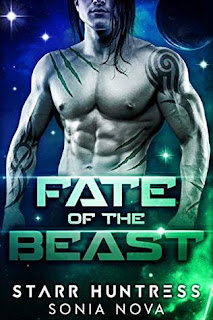 Fate of the Beast (Mate of the Beast #2) by Sonia Nova
Format: ebook
Source: borrowed through Kindle Unlimited
Disclaimer: As an Amazon Associate I earn from qualifying purchases.
Date read: January 10, 2020


An Ambassador trying to hold peace…
Being an Ambassador wasn't easy. It was even harder when you were the Earth Ambassador on an alien planet that was on the brink of war. As if Naomi didn’t have her hands full with war negotiations and ensuring the safety of humans on Agaria, the last straw is the beastly Ezak-X soldier who seems to push all her buttons wrong. But when the war breaks out and the safety of humans is threatened, the odd, horned beast might just be the only man she can count on...

But with how her body reacts in his presence, can she trust herself with him...?

A beast thirsting for war…
Arez has waited for this day his whole existence. Ever since he was created in that damned lab by the scaly Krezlians, he's wanted nothing more than to destroy them. But just when he can taste the war on his lips, he gets thrown together with a peace-loving human female who makes his body hard and his blood boil for an altogether different reason. He's never wanted anything more in his life – except maybe for revenge – and he soon realizes he must make a choice.

Thoughts on Fate of the Beast: MAN, I like these Ezak-X warriors. They're a teeny bit surly, a touch revenge-minded when it comes to their former captors, and a whole lot protective when they find their special someone. Let's face it, that's pretty much EXACTLY what I like in alien heroes.

Arez and Naomi have a few fundamental differences to work out. The biggest being that she's dedicated to maintaining peace and he's itching to do some damage to their enemies. This wouldn't be a problem under normal circumstances, but when the Krezlians attack and Naomi and Arez end up in their clutches Arez has to figure out whether revenge or Naomi are more important to him and Naomi has to put aside her desire for peace because the Krezlians are NOT peace-minded. They just want to figure out a way to make more Ezak-X soldiers to subjugate.

What can I say except I'm really digging the soul-deep bonding going on between these genetically modified warriors and the woman who rile them up. *thumbs up*