A Nurse for the Wolfman by Eve Langlais [Review] 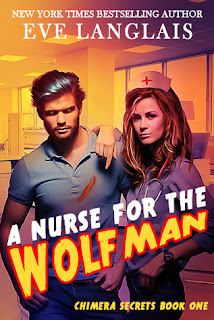 Chimera Secrets
1. A Nurse for the Wolfman - Paperback | Kindle
2. Guarding the Mermaid
3. The Lionman Kidnapping
4. A Chimera's Revenge
5. Capturing a Unicorn


What happens when a nurse falls for the wolfman?

The job offer is a dream come true. Three times her usual salary. Free meals and a suite. The only catch?

Margaret can’t tell anyone about it.

Hidden in the Rockies, the clinic is well protected and…odd. It doesn’t take her long to realize the doctors and scientists are up to no good. Especially once she meets Luke.

Her patient is an angry man who used to be a soldier. Now, he’s something else. A savage beast with gentle eyes that glow green when he’s agitated.

What has he become?

And will she be next?

Thoughts on A Nurse for the Wolfman: You know how they say when something's too good to be true, it probably is? Yeah. Both Luke and Margaret got caught in that trap. Luke was offered the deal of a lifetime to heal his injuries and Margaret was offered the job of a lifetime right when she needed it. Both of them ended up in the middle of something straight out of a nightmare.

Well, except for the sexy dreaming parts. Those were definitely not nightmare-esque.

On Luke's end, he got his miracle cure, but it came with a whole bunch of side effects. And, well, imprisonment. Which sucked. Margaret's danger meter was giving her some warning signals right out of the gate, but by then it was too late since she was already at the facility and didn't have a whole lot of options for leaving.

Unfortunately, since Luke's warnings seemed way too outrageous to be believed, Margaret wasn't terribly prepared when things turned as bad as they did. However, she did adapt admirably to Luke's altered form and the truth of what was going on when it all came to light.

That said...KEEP RUNNING, YOU TWO! Bad things look like they're brewing on the horizon and the doctors aren't through with you yet!