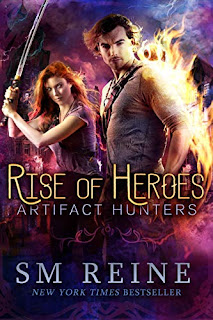 
THE CONCLUSION TO ARTIFACT HUNTERS.

With his secrets exposed and his partner-in-crime gone, renowned thief Shatter Cage has only one target in mind: Silverclaw, the fallen Hero responsible for destroying Cage’s life. He’s teamed up with his sometimes-enemy-current-fiancee Brigid Byrne to destroy Silverclaw’s organization piece by piece, no matter how long it takes.

The Oracle who canonized Silverclaw wants a more absolute type of revenge. Like, Silverclaw’s head on the end of a legendary sword. She’s willing to pay for the job done right. And if Cage will kill Silverclaw, she’ll make Cage into a Hero.

Becoming Hero is all Cage ever wanted, but he’s never murdered before. He can have his dreams at the price of blood on his hands. And hey, why not? There’s no reason an old were-squirrel can’t learn new tricks…

Thoughts on Rise of Heroes: Oh, HA! Cage and his plan-less shenanigans are EXACTLY what I needed right now. The dude is a hyperactive hot mess and I am so here for it. His fanboy crush on Silverclaw has morphed into something decidedly less fanboy crush-esque (Cage is DETERMINED to bring the d-bag down after what he did to Vex) and THINGS ARE GETTING WILD no matter how you look at it.
But it takes a little doing to get to the getting wild part. At least on a scale that was actually doing damage to Silverclaw. And it took Marion getting involved. Which ALWAYS makes things interesting. And complicated. But they got there and it was FANTASTIC.
In the end, we got Cage's glorious squirrel-shifter hyperactivity, a range of demons and other allies, a FIERCE Brigid, a whole bunch of mind-slaved demons, a call-back to Dana and her glory days, a meeting with Death himself, and the Vex bros doing their thing. Cage's uncomplicated outlook on life and everything happening around him is just...fun. It's fun and tends to land him in dangerous situations, BUT SO IT GOES.