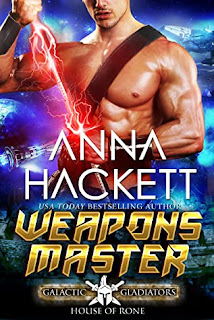 Galactic Gladiators
(Find all the books in this amazing series on the 1st book review)
1. Gladiator


A grumpy cyborg weapons master collides with a feisty mechanic from Earth who turns his ordered existence upside down.

Abducted from her exploration ship and enslaved on a desert world, mechanic Bellamy Walsh has fought for her survival. She’s had to fight for everything in her life, and she doesn’t ever expect things to be easy. After being rescued by the tough, deadly cyborgs of the House of Rone, she is shocked to find herself drawn to a grumpy beast of a cyborg. A genius weapons master who prefers his solitude. A man with scars of his own. A man whose brawny arms are the only thing that chase away Bellamy’s nightmares.

Maxon Shaye likes to be left alone to work. He doesn’t mind his fellow cyborg brethren, but he finds people annoying and chaotic. He’s disconcerted by his growing need to keep Bellamy Walsh safe, and thinks she’s irritating and brash. The woman keeps invading his workshop, getting in his space, and…the even more infuriating thing is that he’s actually starting to like her there. What he doesn’t like is her burning need to throw herself back into danger.

Bellamy is determined to help bring down her captors—the metal-scavenging Edull and their deadly desert battle arena—and that makes her a target. She knows too much and the Edull will stop at nothing to silence her. Maxon will do anything to keep her safe, even if that means threatening the growing bond between them. But in order to destroy the Edull’s arena once and for, Maxon and Bellamy will put everything on the line—their desire, their love, their lives.

Thoughts on Weapons Master: It's time for grumpy Maxon and determined Bellamy to do their thing. He's gloriously anti-social, talented at crafted weapons, and not looking to get involved in ANYTHING that involves interacting with others. She's one of the abducted Earth women who's been making trouble for the Edull while trying to figure out a way to escape their clutches.

For all Maxon doesn't want to get involved, he's been drawn to Bellamy since he first laid eyes on her. When she fell back into the hands of her captors, he was driven to rescue her. And once she was safe? Well, he's still protective and grumpy and somehow that's exactly what Bellamy needs.

Well, she needs a protective, scowly weapons master AND to exact revenge on those who held her captive. The lady has STYLE when it comes to wholesale destruction, btw. She's good at causing messes. Especially when she has the right tools at hand and allies at her back.

I've been loving these books since we were first introduced to Carthago and the gladiators who worked to help others behind the scenes. This arc might have ended (gloriously, might I add), but it looks like there's more in store with the introduction of one hunky king. I CAN'T WAIT!