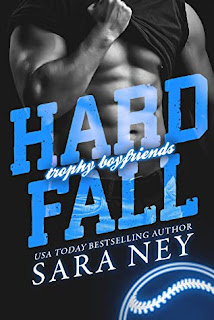 "Hard Fall"
That's what my mom is always saying: "The bigger you are, the harder you fall." She's talking about love—I've never been in it myself, but that doesn't stop me from secretly matchmaking for my friends. Who would suspect me, a world class athlete, of meddling in other people's love lives? I love Love, especially when it’s not me who’s doing the falling…
"No Thanks."
That's what Hollis Westbrooke said when I asked her on a date. Well, propositioned her, actually—but it was all a big joke; one she doesn't think is funny. My stomach is in knots since I might actually like this girl so the joke is on me. Hollis’s father is my boss—and she doesn't date players.
The bigger they are, the harder they fall—especially when biggest player is me.

Thoughts on Hard Fall: Ha. THIS GUY. We met Buzz/Trace in Noah's book and he was part entitled, gross playboy and part sweet matchmaker. Which are two things you wouldn't think work together in one body, but Trace has the abs to pull it off. Or something.
The point is Trace is both gloriously blunt and upfront and also sweetly romantic. Somehow SOMEHOW he manages to hide his deep romantic streak most of the time. You know, the streak that comes out when he starts matchmaking and getting soulmates together.
He's also super competitive. Especially with his brother. And that blunt side of his means he has basically no filter AT ALL. Which is both terrifying and hilarious all at the same time.
As for Hollis, she's determined to make her own way in the world and not rely on the silver spoon she was born with. She's also been burned by a baseball player in the past so dating/hooking up/what have you with Trace is not on her list of things to do in the near future.
But Trace is determined and Hollis kinda likes his brashness and THINGS HAPPEN. Oh BOY do things happen. MAN, I like them together.