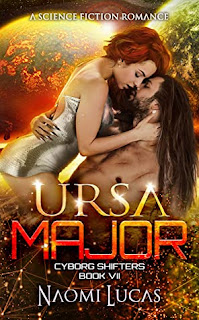 
Terraform Zero, a virtual reality colonization game, has swept the galaxy by storm. The Champions are household names that give humanity hope. Vee Miles believes she is good enough to compete amongst them, but the costly entrance fee is holding her back.

Still reeling from a publicity nightmare named Zeph, the corporation is desperate to change the public’s opinions toward Cyborgs. They offer to sponsor Vee. The EPED gets the PR boost, and she gets to keep the prize money. The EPED’s deal comes with strings though, and she has to pretend to be a made-up Cyborg shifting bear named Cypher.

A male that had the look of a Viking space warrior, with enough scars and otherworldly brawn to make any woman swoon. An imaginary male that makes her heart race…

Little does she know she’s being used as bait to lure the real Cypher from his den.

He’s coming for her, and there’s no place virtual or otherwise for her to hide.

Thoughts on Ursa Major: A growly, mostly feral ursine cyborg shifter and a sweetly innocent gamer. They don't sound like they'd be a perfect match on paper, but Nightheart knew what he was doing when he started pulling strings.

Fair warning, Cypher is NOT happy about Nightheart's string pulling. Well, not at first. Maybe not even at second. But eventually he comes to terms with it and how drawn he is to Vee.

Cyborg shifters sure are a growly, violent lot, aren't they? (And that's only part of why I like them so much.)

As for Vee, she has the thing she wants most dangled in front of her and she snaps it up without realizing the situation she's being maneuvered into. On the cyborg end, Nightheart's using her as bait to draw Cypher out. But there are also other people and organizations in the background willing to exploit her to get something they want. Which Cypher is not willing to let happen.

Yeah, cyborg shifters get a wee bit possessive and protective when someone they have a thing for is threatened. And Cypher definitely has a thing for Vee.

Feral cyborgs, crazy situations, and some seriously steamy encounters. All the things I pick up these books for.