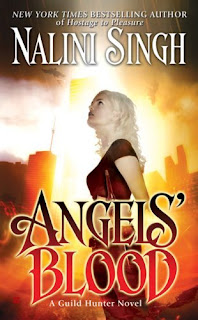 
Vampire hunter Elena Deveraux knows she's the best—but she doesn't know if she's good enough for this job. Hired by the dangerously beautiful Archangel Raphael, a being so lethal that no mortal wants his attention, only one thing is clear—failure is not an option...even if the task is impossible.

Because this time, it's not a wayward vamp she has to track. It's an archangel gone bad.

The job will put Elena in the midst of a killing spree like no other…and pull her to the razor's edge of passion. Even if the hunt doesn't destroy her, succumbing to Raphael's seductive touch just may. For when archangels play, mortals break…

My Thoughts: Holy cheese and crackers, Batman!  This book was fabulous.  Darker, much edgier and more sexually charged than her Psy-Changeling series, it just blew me away.  And when I say that, I need to point out that I really liked the Psy-Changeling series.  Really.  Raphael's smoldering sex appeal jumped off the page.  It jumped at me.  I was like, "Whoa.  Back up there, buddy.  It's hard to read when you're dripping sexy vibes all over the place."  For the record, he didn't listen.

I loved Elena.  She's strong, tormented and driven to use her gifts.  Cast out by her family, she's built up a network of people she trusts who have become her family by choice and who she'll defend with everything inside her.  She's disarmingly honest with herself.  For all she doesn't want to be, she's fascinated by Raphael.  I love the backstory of Elena's childhood and can't wait to get more than the dribbles we've been given.

So, let's talk about Raphael.  I love that he's written as someone who's strong, ruthless when he needs to be and not human.  He might be gaining some humanity by his interactions with Elena but he's still an angel.  His ways are not human ways and there are times when his ruthlessness shocks Elena.  The vampires he has surrounded himself with are all loyal and strong, willing to risk life and limb to keep him safe.  If the thing that's putting him in danger happens to be Elena, they'll remove her from the picture.  You gotta respect that sort of single-mindedness.

All in all, this was an outstanding book that was dark and sexy.  The worldbuilding was phenomenal and left me drooling for more.  The characters, from out mains straight on down to the minor players, were dynamic and alive.

In short, I loved this book and I'm terribly, terribly happy that the next two books in the series are already out.