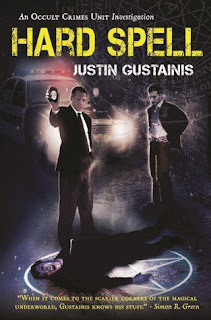 Like the rest of America, Scranton's got an uneasy 'live and let unlive' relationship with the supernatural. But when a vamp puts the bite on an unwilling victim, or some witch casts the wrong kind of spell, that's when they call Markowski. He carries a badge. Also, a crucifix, some wooden stakes, a big vial of holy water, and a 9mm Beretta loaded with silver bullets.

My Thoughts:  Whoa. Justin Gustainis has given us a fast-paced, brutal and bloody urban fantasy that kept the hits coming.  The worldbuilding here is dark and interesting.  The supernaturals aren't cuddly but they aren't all bad guys.  Poor Stan and his beleaguered partner get thrown into the middle of a brutal series of crimes and have to unravel the threads of why it's being done as well as who's behind it.

Stan was an interesting character.  In most ways he's the very epitome of a level, fair-minded cop, yet he has a few hang-ups regarding vampires that coudl cause him to stumble.  These are legitimate hang-ups, mind you.  He's been through a lot and he's made some choices in his life that are questionable.  Yet, when the chips are down, he'd do it all again.  I liked that he had regret but he was willing to both live with it and make the same life altering decision twice.  I admire someone who stands up for what they believe in.

The plot moves quickly and the crime scenes are often bloody.  It was a downright fun read that tied up all the loose ends in this arc while laying down several directions the characters could go in later books.

Disclaimer: As an Amazon Associate, I earn from qualifying purchases.
Hard Spell was provided for review.
Posted by Kelly Rubidoux at 12:22 PM