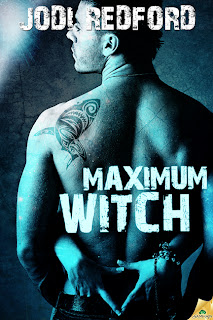 
Willa Jameson is having one whopper of an identity crisis. Odd memory flashes that aren’t hers. A sultry voice in her head that’s obsessed with sex. Even weirder, she finds herself in the jaws of a rogue leviathan, dragged to the bottom of the ocean—and rescued by a hunky… shark?

The last thing Sheriff Max Truitt expects to find on his daily, deep-Atlantic patrol is a human—especially one who breathes underwater. Compelled to take her home, he waits for the beauty to wake up and reveal her name. Instead he’s treated to a punch in the nose, then a sexy romp hot enough to boil water.

The next morning, embarrassed by the sizzling, scandalous things the voice in her head drove her to do, Willa slips away. But if there’s one thing a determined shark excels at, it’s tracking his favorite meal.

Solving the mystery that is Willa is no simple task. When they finally unlock a dangerous secret hidden deep in her subconscious, it drives a wedge between them…and puts them in a desperate race against an evil that seeks to rain down a watery Armageddon on all mankind.

My Thoughts:  Oh, lordy!  Do you see that warning up there?  The one that says that there's plenty of smoking-hot lovin' with a shark?  It's true.  All of it.  There is no puffer fish sex.  There's no sea horse sex.  There's just a lot of steamy, sexy, panty melting good times between Willa and her hunky shark shifter.  *fans self*  Oh, yeah.  Jodi Redford knows how to bring the heat.

One thing that I'm really enjoying with this series is that each of the books are very different.  Sure, we get those growly Alpha males who like to make sure their ladies are taken care of, if you know what I mean.  And I don't see how you couldn't since I'm not very subtle.  But just in case you couldn't figure out what I was alluding to: These Alpha bad boys like to make sure their lady friends have plenty of orgasms.  And I do mean PLENTY!  What's not to like about that?

I'm sorry.  I got distracting talking about orgasms and shapeshifters again.  I was saying that these books are all wonderfully different.  Jodi Redford has given us such a wide variety of bad guys as the series progresses that it makes me grin.  Zombies!  Voodoo Queens!  Soul Stealers!  Dude.  Variety is all spicy and stuff and this series is liberally seasoned.

Now that I've totally gone off on a tangent I'm going to say this: I like this book.  I like shark shifters.  I like the way Jodi Redford writes.  I like talking to Jodi Redford about the possibilities of puffer fish sex.  Bottom line, I like the world that has been created and I'm kinda in love with the idea of a big, predatory hero who looks at their lady like he's going to eat them right up.  *sigh*

If there's one thing I think everyone needs to know, it's this: Jodi Redford writes the best non-puffer fish sex I've read all week.

Yep, that sums it up.

Other reviews in this series:
Book 1: That Voodoo You Do
Book 2: The Seven Year Witch