Review: Turn It Up by Vivian Arend 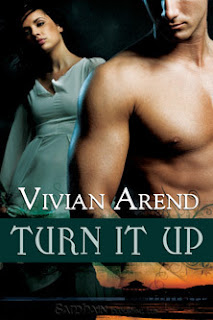 Turn It Up (Turner Twins #2) by Vivian Arend
Synopsis (Goodreads):


Maxwell Turner considers his stubborn and resourceful attitude a plus. After all, it usually gets him what he wants—except for Natasha Bellingham. The long-time family friend may be ten years older than he, but so what? He’s plenty old enough to know they belong together. Now all he has to do is convince her.

Over the past few years Natasha’s love life has degenerated into a series of bad clichés. Her biological clock is ticking—loudly. As a proven architect with her own house-design company, she’s financially ready for a baby. Who says she needs a permanent man in her life for that? She just needs a “donation”.

But there’s one non-negotiable clause: He wants forever. And he intends to do everything in his power—fair and unfair—to make it happen.

Warning: This title contains one younger man ready, aimed and hell bent on giving one woman everything she wants. Includes interludes against the wall, in a Jacuzzi, on a car hood and even—shockingly enough—on a bed or two. Oh, and about that porch swing? Yup…

Max and Tasha were deliciously sweet together. He's been lusting after her for years, she's determined to keep him at arm's length because he's her friend's younger cousin. Never mind the attraction, the sparks, the fact that he wants her as much as she wants him. She's set her mind on this course and she's determined not to waver from it.

Naturally, she ends up spilling her proverbial guts to Max after a few too many drinks and now he knows that she wants him like whoa. And he's just as determined as she is to get what he wants. Their push and pull was fun and sexy. Even when Tasha gave in and let max into her life, she still managed to hold herself apart from him and that drove him absolutely crazy. Their sexy shenanigans were fun fun fun as he set out to show her that wasn't like any of the previous men in her life.

Overall, this was a very fun book. Sure, watching Tasha's relationship with a friend deteriorate because the friend didn't approve of Max and Tasha together was uncomfortable. In a good way. I wanted to shake Lila and tell her to go deal with her own issues instead of bringing her friend down. However, getting to see Tasha build herself back up again and face her fears head on was pretty awesome.