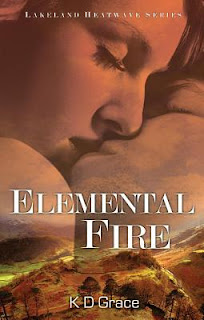 
Using powerful sex magic, revenge-obsessed Kennet Lucian makes a deal with the lusty fire demon, Lucia, to help him end Deacon’s reign of terror. Having her own reasons for hating the demon Deacon, Lucia agrees to help…for a price. Their bargain leads Kennet to a sexy encounter on the Lakeland fells with Tara Stone, head of the Elemental Coven. Tara’s a powerful witch, with her own staggering hatred for Deacon. The attraction between Tara and Kennet is magnetic and the sex combustible, just as Lucia suspected it would be. Lucia plans to use their lust for each other to bring about Deacon’s downfall. But as lust gives way to feelings Lucia hadn’t bargained for, the path to Deacon’s destruction is far from clear, and the price that must be paid to be free of him for ever may be too high, even for Tara Stone.

My Thoughts: This has been one wild ride with this coven and their sexy shenanigans. Led by the powerful and long-lived Tara Stone, they've creatively juiced themselves up with sex time and time again as they've tried to destroy Deacon and take back their lives. Things are coming down to the wire now and the Tara and her group have to figure out how much they're willing to sacrifice to end it all.

Speaking of which, Deacon is one creepy dude. His ability to overpower one's sense of self and make them feel equal parts arousal and fear - his ability to tap into the Dream World and twist dreams and nightmares - is downright unsettling. Creepy bad guy is creepy, is all I'm going to say.

You know, it's going to be hard to say goodbye to this sex-charged coven but I liked the way everything turned out. The entire series has been nicely plotted and wonderfully naughty. Tara and company work hard and they play hard. If sometimes the work and play meld together into one heaving, moaning mass, well, lucky them.

Disclaimer: As an Amazon Associate, I earn from qualifying purchases.
Elemental Fire was provided for review.
Posted by Kelly Rubidoux at 6:00 AM