Today we have a guest post from the amazingly talented Felicity Heaton. Check out my review for Her Wicked Angel and see where she got her inspiration for this series from. Make sure you stick around for the giveaway at the bottom of the page!

And now I'm turning the blog over to Felicity... 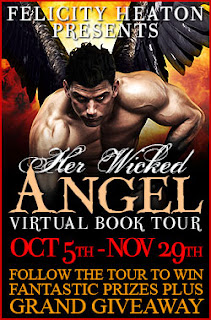 Thank you, Kelly, for having me here today as part of my Her Wicked Angel Virtual Book Tour!

First, here’s a little about me. I’m a paranormal romance author and I’ve been writing since 2005, and went indie in 2006. I love to write big worlds, populated by vampires, shifters, demons, fae and angels, and I have several series. This tour is about the Her Angel series, where passionate angels fight to protect the women they love in a deadly war between Heaven and Hell.

Today, I’m going to talk a little about what inspired me to write the Her Angel series and also the books and the major continuing story arc happening right now.

FREE EBOOK: Want to get a free taste of this series? You can download the first book, Her Dark Angel, for free at selected ebook stores (and two other free paranormal romance ebooks too). Find all the links at: http://www.felicityheaton.co.uk/paranormal-romance-ebook-offers.php


The Her Angel series came to me when I was walking to work one day questioning a plot idea I had been writing down notes for. It was a vampire romance at the time but I wanted to see how I could make it different, and then for some reason I decided to see if it would work better with angels rather than vampires as the protagonists. It would. Because I started thinking about angels for that story, I started thinking about them in general too, and what it would be like to have an angel series where the angels weren’t all fallen and were still working for a higher power, but while they were messengers of God, they were their own beings too, able to make their own decisions and pursue their own passions without castigation. They’re all male and they’re passionate, frivolous at times, and like to bend the rules as much as they can without breaking the ones still in place, and they’re curious about anything that was previously forbidden, such as alcohol and other things, just like a human would be.

I wanted the first angel I introduced to straddle the line between good and bad. I wanted him to be dark, powerful, and alluring. I started to research angels and look for names for this hero forming in my head, and I came across Apollyon. There’s some debate about whether Apollyon is an angel or another name for the Devil. Either way, he’s cited as being the “Great Destroyer” and “King of the Bottomless Pit”. I thought he would be perfect as the hero I had wanted to write, and Her Dark Angel began to take shape in my mind and the series formed with it.

I wrote the first three novellas in the series, focusing on the romance and fleshing out the world, building it for readers to envisage as they immersed themselves in the books. When I reached the final novella, I didn’t want to leave the world and a new direction came to me, one involving novels. I love to write novels. I excel at writing longer books full of twists and turns, action and suspense, and plenty of drama and intense emotion. The sort of books and characters that really grab you and refuse to let you go!

I will admit, I was nervous about this expanding world because of the subject I was about to introduce into the series with the first novel, Her Guardian Angel.

Her Guardian Angel is the starting point for one of the main story arcs in the series. It switched the focus to a major eternal battle between Heaven and Hell, and upped the stakes for everyone in the series so far. It put into motion a series of events that would take place over the coming novels, building towards a climax that will be epic. It also introduced our first angel of Hell, Veiron.

Veiron takes centre stage in Her Demonic Angel, and we explore his side of this world. Veiron is in service of the Devil, but he’s also one of the pawns in the game between Heaven and Hell, and he’s very tired of it and despises the things they’ve made him do in the past, which includes falling and pledging himself to the Devil. Her Demonic Angel really brings us down from Heaven and the mortal world and into Hell as the Devil tries to execute a plan to create a new player in the game, someone who will tip the balance in his favour. During Her Demonic Angel, we meet the Devil’s right hand man, Asmodeus.

Asmodeus was made for evil, created by his master in Hell to serve him and given the title of King of Demons when he had proven himself worthy of the status during his centuries of service. Asmodeus is not the sort of angel you want to trifle with, and he has some serious issues—not only the fact that he was created from the blood of Apollyon and is essentially that angel’s evil twin.

In Her Wicked Angel, Asmodeus is sent to the mortal world to retrieve a female for the Devil and sets eyes on the most beautiful woman he’s ever seen, a woman who challenges him at every turn and seems to have a mystical power over him, that sliver of good begins to grow and he realizes that he can’t let his master have her… because he wants her for himself.

Liora is a witch and has always known that angels existed, but she never thought she would meet Asmodeus. The glowering dark angel warrior with his black wings and golden eyes makes her burn hotter than Hell itself and she can’t resist the fierce attraction that blazes between them. He’s dangerous and deadly… and he might just be her only hope for survival.

Readers can grab a six chapter sample of this book, and my other books in the Her Angel series from my website. Just head there and visit the book’s page: http://www.felicityheaton.co.uk/her-wicked-angel-book-tour.php

I hope you’ve all enjoyed this peek into the stories in the Her Angel series and what inspired me to write this series.

Be sure to follow this fantastic tour to learn more about the passionate heroes and sassy heroines! You can also find yourself in with a chance to WIN a $50 or $25 Amazon Gift Certificate if you follow the tour. More details, including how to enter and a full list of stops, are available at the Her Wicked Angel Virtual Book Tour page: http://www.felicityheaton.co.uk/her-wicked-angel-book-tour.php

Read more about Her Wicked Angel below, and visit my site for links to all the retailers and a 6 chapter excerpt: 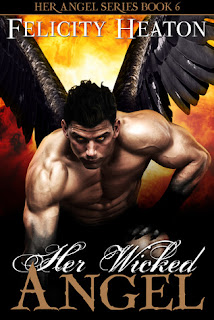 Her Wicked Angel (Her Angel Romance Series Book 6)
Felicity Heaton
The King of Demons and the Devil’s right hand man, Asmodeus is a dark angel born of evil and created for destruction. When his master orders him to venture into the mortal world and retrieve a female for him, he seizes the chance to leave Hell for the first time, uncaring of what the Devil has planned for her… until he sets eyes on the most beautiful woman he has ever seen—a female who awakens new feelings within his black heart, unleashing passion so intense that it controls him and desire he cannot resist.

He will not let his wretched master have her. She will belong to him.

Liora is a witch with a bad reputation and an obsession with fighting demons. A mission gone wrong sees her sent to Paris to cool off, but when a dark and deadly warrior with a gaze of golden fire lands in her life, she ends up burning hotter than Hell for the wicked angel. Nothing will stand between her and the immense, forbidding male. Not her cousin. Not Asmodeus’s sworn enemy and twin, Apollyon. And certainly not the Devil.

Caught up in a tempest of danger and soul-searing passion, can they survive against the odds and seize their forever after?

Her Wicked Angel is available from Amazon Kindle, Kobo Books, Barnes and Noble Nook, Apple iBooks stores and many other retailers. Also available in paperback. Find the links to your preferred retailer at: http://www.felicityheaton.co.uk/ebooks.php?title=Her%20Wicked%20Angel

Find out more about the Her Angel series at Goodreads: http://www.goodreads.com/series/54822-her-angel 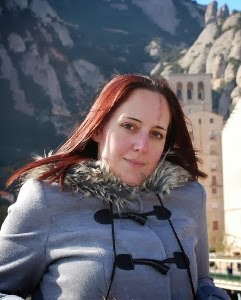 If you're a fan of paranormal romance authors Lara Adrian, J R Ward, Sherrilyn Kenyon, Gena Showalter and Christine Feehan then you will enjoy her books too.

In 2011, five of her six paranormal romance books received Top Pick awards from Night Owl Reviews, Forbidden Blood was nominated as Best PNR Vampire Romance 2011 at The Romance Reviews, and many of her releases received five star reviews from numerous websites.

If you want to know more about Felicity, or want to get in touch, you can find her at the following places: | Website | Blog | Facebook | Twitter | Goodreads |

**A huge thank you to Felicity for stopping by and for offering up a signed paperback copy of Her Guardian Angel -- the 4th book in this fabulous series! Just fill out the Rafflecopter form below to enter!
a Rafflecopter giveaway

Email ThisBlogThis!Share to TwitterShare to FacebookShare to Pinterest
Labels: Misc: Spotlight On