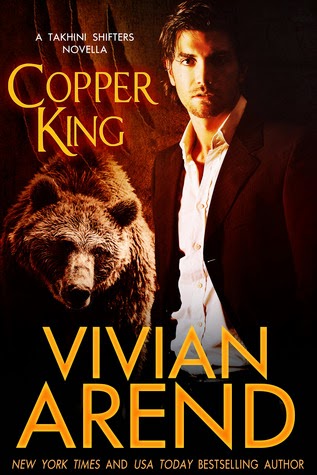 
Three things make billionaire Jim Halcyon’s to-do list: women, work…and more women. It’s a perfect agenda for a rich shifter who has no problem letting his inner grizzly out to play. From the bright lights of Vegas, to the sophisticated action of New York—he’s got the money and the power to do anything he wants.

Anything, except resist the lure of Lady Luck, an ancient copper coin he gambles yearly to possess. Jim is determined to regain control of the pretty penny, and damn if he’ll let any bit of eye candy distract him from his goal. Not even the mesmerizing woman in the middle of the casino floor with the shimmering hair and enormous green eyes.

With a life-changing move ahead of her, Lillie’s finagled a temporary layover en route to her future. She’s got five days to soak in new experiences, and while Vegas is too big and shiny and loud for her shy bear self, she’s eager to do this up right. It’s the last chance she’s got to let her hair down.

Until his challenge begins, Jim is more than willing to oblige Lillie’s wish for a final fling. Only Lady Luck has some twists of fate planned for them both…

Thoughts on Copper King: I have a bit of a love affair with Vivian Arend's Takhini wolves and all the various other shifters they interact with. So this book hit the spot. Bears! Bears in Vegas! I find it very difficult not to smile when I read that.

Jim and Lillie are fun. Lillie's shy, Jim's not. In fact, Jim's a bit of a ladies man. Which works out when he sets his sights on the lovely Lillie. Throw in a wolf who likes to needle his friend and who flirts like it's nobody's business, and Vegas won't know what hit it.

When I say Lillie's shy, I mean her bear's shy. Lillie isn't exactly (she does a little dance for Jim that's anything but), but she's definitely hiding something and that something makes her secretive. Which raises a few red flags for the men.

While the ending isn't necessarily a huge surprise, the events leading up to it are very fun. And the sexy times? Steamy. Who knew two bears would tangle up the sheets so satisfactorily?

Wait. This is a Vivian Arend book. The sheet tanglin' was no surprise at all. And that's just the way I like it!