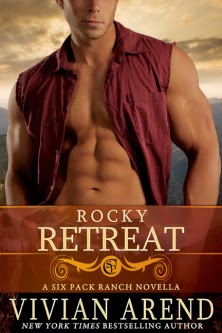 
Finding white-hot love in a white-out…

Eight months ago, Lee Coleman met the woman of his dreams…then lost her to another man. He buried his disappointment by throwing himself into work on the family ranch, but when a winter storm leaves him stranded, Lee finds more than shelter in the rustic safety of a hunter’s cabin—he finds a second shot at love.

Rachel Malone’s heart has been broken and stomped on by her cheating ex, and she’s determined to never fall in love again. But a rebound fling? Doesn’t sound like such a bad idea, especially when she’s snowed-in with a gorgeous, sweet-talking Coleman.

Despite their off-the-charts chemistry, Lee makes it clear he wants more than a temporary romp. In fact, he’s made it his mission to put a smile back on her face, even if it means taking it slow and resisting the scorching heat between them. This time around, he wants forever, while Rachel is positive that forever is a fool’s dream.

Thoughts on Rocky Retreat: Things I enjoy in books: Two people with loads of sexual tension being snowed in and forced to share body heat. Seriously, that's one of those THINGS that makes me pick up a book practically sight unseen. I just... love it.

AND THIS BOOK HAD THAT.

*swoons all over the place*

Okay, okay. Besides the AWESOME snowed in scenario, Lee and Rachel have some smokin' chemistry. Leery of the age difference between them, Rachel had blown him off in the past and made the colossal mistake of marrying another man. The mistake wasn't in marrying another, mind you (although Lee might argue that point), but in getting caught up in the whirlwind romance and missing the signs the now-ex was a cheater. Poor girl.

Okay, fine. The other mistake was in letting the age difference between her and Lee come between them in the first place. To be fair, Lee is an older soul than his physical age would indicate. He knows what he wants and he goes for it. And when what he wants goes for someone else, he steps aside and nurses his hurt in private. *sniffle*

Then the stars align and that SNOWED IN thing happens and all is right in the world again.

I'm loving these Coleman's. They're strong, the women they fall for are strong, and they're willing to fight for the things that matter to them. *slow thumbs up*