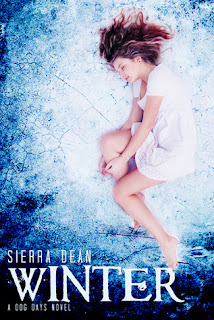 After surviving the explosion of the Poisonfoot Library, she struggles to find her footing again, and she’s grateful Archer Wyatt is there to make sure she’s all right. But Archer seems to be around an awful lot and Lou has trouble controlling herself when she’s with him. She should be thrilled the most popular guy in school wants to be with her, but still, there’s that nagging feeling…

Cooper Reynolds knows he ought to let Lou go. He was putting her at risk by letting her in the first time, and now that she’s a blank slate he should just let her go on blissfully unaware of his curse. But she’s given him a taste of something dangerous… hope.

Can Cooper and an unlikely ally help Lou break free from the spell she’s under?

And can they do it before a new force threatens to destroy the whole town?

Thoughts on Winter: It's been a while since I read book 1 and I'm so so so glad I have the next books in the series queued up so I can find out how things turn out because...HOT DAMN, THINGS ARE HAPPENING. Thiiiiiiiings!

Like Lou's loss of memory about all things Cooper. As an aside, Archer is an awful person and he's going to have to do a whole lot of groveling to make things right after what he did and allowed to happen. As of right now, I'm not seeing much chance for redemption in him. Actually, I don't see much in his entire family. The Wyatts are bad and all the things they done just have to come back to bite them in the butt at some point.

But let's get back to Lou and Cooper. With Lou's memory on the fritz, they reset to how things had been when Lou first moved to town. Except Lou has the nagging feeling she's forgotten something important. You know, something like a cursed boy who's come to mean far more to her than she ever expected.

Things are heating up in Poisonfoot and Spring is coming on soon.