Amid the Winter Snow Anthology [Review] 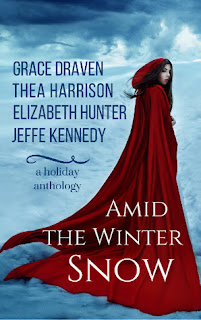 
As the snows fall and hearths burn, four stories of Midwinter beginnings prove that love can fight its way through the darkest night…

THE DARKEST MIDNIGHT, by Grace Draven
The mark Jahna Ulfrida was born with has made her a target of the cruel and idle all her life. During the long, crowded festivities of Deyalda, there’s nowhere to escape. Until a handsome stranger promises to teach her to save herself…

THE CHOSEN, by Thea Harrison
In her visions, Lily sees two men fighting for her tiny country’s allegiance: the wolf and the tiger, each deadly, each cunning. One will bring Ys chaos and death, one a gentler path—but she’s destined to love whichever she chooses. The Midwinter masque is upon them, and the wolf is at her door…

THE STORM, by Elizabeth Hunter
When her soul mate died in a massacre of the half-angelic Irin people, Renata thought she’d never feel happiness again. She’s retreated to her childhood home in the snowy Dolomites to hide and remember the hurt—until determined, irrepressible Maxim arrives to insist on joy, too. And before she can throw him out, they discover a secret the Irin have to know…

THE SNOWS OF WINDROVEN, by Jeffe Kennedy
As a blizzard batters the mountain keep of Windroven, Ami, Queen of Avondligh of the Twelve Kingdoms, and her unofficial consort Ash face their own storm. Ash knows a scarred, jumpy ex-convict isn’t the companion his queen needs. But when a surprise attack confines them together in their isolated sanctuary, the feast of Midwinter might tempt even Ash into childlike hope…

Thoughts on Amid the Winter Snow: I came for the Elder Races and got sucked into all of them.

The Darkest Midnight: Oh, man. Jahna and Radimar had the most wonderful slow burn romance. Part of this is because Jahna is young when they first meet and she needs to grow into herself, and part of it is because Radimar is trying to convince himself his lifestyle isn't the type that takes a wife. Yet, he still has decidedly non-brotherly thoughts about Jahna  even when he's trying to think of her in that way. It was, in a word, perfect.

The Chosen: I'm a HUGE Elder Races fan, so it should come as no surprise that I absolutely ADORED Lily and Wulf's story. Lily was just so sweet and mindful that every choice she makes will have an impact on her people. And Wulf...Wulf is everything I love about Elder Races heroes. He's crafty and forceful, but he sees that too heavy a hand will send Lily running. So he takes his time with her and it was FANTASTIC. I guess you could say Lily's sweetness brought out his lighter side. Honestly, Wulf needed that lightness. With everything he's had to deal with lately, he's buried under a cloud and the idea that he was heading to war wears on him.

The Storm: Renata and Max. The whole soul mate dying thing was rough. Renata was so broken after. Even when she wasn't broken-broken, she was still hanging onto her heartache so tightly she couldn't see how much Max meant to her. Finding the secret in the caverns helps her in more ways than one. Facing her pain ends up making her stronger. That said, I'm pretty sure Max would stand by her whether she was still lost or not.

The Snows of Windroven: Okay. So I have the BIGGEST soft spot for damaged heroes who can't see how heroic they really are. Ash TOTALLY checks off all those boxes. The guy has a lot of baggage and his sense of self-worth is pretty tarnished after his years in prison, but he's a good one. His biggest flaw is probably his lack of communication. But, again, those years in prison can mess with a man. Good thing Ami is the sort to force a confrontation. It takes a while to drag his fears out of him, but she perseveres and gets the big guy talking and it's FANTASTIC.