Review: Goddess With A Blade by Lauren Dane 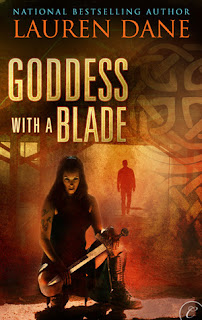 
Armed with a blessed blade and blood from a goddess, Rowan Summerwaite’s got a divine mission. Embodying a Vampire’s worst nightmare is a big job, but someone’s got to do it.

Freshly returned from a political firestorm that erupted after she’d executed the last Scion, Rowan hopes for a period of peace and quiet with the new replacement.

But before long, human women are being found in and around Las Vegas and it’s clear to her the killer is a Vampire. Clive Stewart rules his Vampires with an iron fist in the wake of a spectacular failure on the part of his predecessor. He doesn’t make the mistake of underestimating The Hunter. He knows she’s a predator just like him so he agrees to help her investigation. Within limits.

But nothing between Clive and Rowan stays within the lines and before long, things are tangled and dangerous both personally and professionally.

My Thoughts:  I almost don't know where to start with this review because there were simply so many things I loved about this book.  In fact, I'm feeling the love so much I hope I don't embarrass anybody with my effusive gushing.

First things first- Lauren Dane writes amazing characters.  Not just in this book, either.  Every one of her books has these incredibly strong women who burst out of the pages.  You might think it would be a challenge to match these women with men who can meet their strength without being threatened by it but Lauren Dane does it time and time again.

Rowan and Clive are explosive together.  She enjoys needling him and he sees her strength not as something to conquer but as one of the things that makes her so alluring to him.  He enjoys her quick mind and that she can physically hold her own against him.  Under her prickly exterior, Rowan is a woman divided.  Her position as The Hunter means she has to be strong and hide her pain and loneliness so that the Vampires she hunts can't use her weaknesses against her.  She so rarely gets to show her softer side that the flashes she lets escape are all the more poignant.

Lauren Dane has given us a dark, gritty world full of predatory creatures and the Goddess-blessed woman who keeps them in line.  Fast paced and filled with snarky dialogue this is easily one of the most captivating books I've read this year.

Disclaimer: As an Amazon Associate, I earn from qualifying purchases.
Posted by Kelly Rubidoux at 7:37 PM