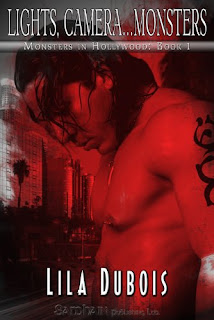 
When monsters need a makeover, they head for the one place that can make it happen. Hollywood. Book 1, Monsters in Hollywood series. Luke is desperate to save his people. A lifetime of sneaking in to human houses and watching movies has convinced him that if he can make a great movie about monsters, humanity will change its opinion of them. With his friends at his side, all in shiny new human bodies, Luke heads for Tinsel Town.

A rising Hollywood producer, all-business Lena knows a good story when she sees it. Luke? He's just another amateur who wants to get famous. But Luke's too gorgeous to pass up. And there's something vulnerable about him that leads her to throw caution to the wind and invite him to dinner.

One night of incredible sex later, Lena wakes up next to the surprise of her life. She's sleeping next to a monster. Literally.

Appearances aside, she finds herself wanting to help Luke save his people. But they've got more to worry about than just human prejudice.

Some of the monsters would rather stay in the closet-and to make them all stay there, they're willing to kill.

My Thoughts: Let's be honest here, this is exactly my type of book.  That said, even if it wasn't I would have been sold on "sex with monsters".  I mean... Sex With Monsters!  Awesome.

This book?  Pretty awesome itself.  Because of the aforementioned sex with monsters PLUS there's that whole sex with a human dude thing.  Or, you know, he's human as long as the spell's on him.  I mean, he's technically a monster regardless of what form he wears.  A cat is still a cat even if you dress it up like a dog.  Which is a weird analogy and I'm just going to move on.

I liked this book.  It moved quickly but Lena was trying her pretty darn hard to have a one night stand with Luke so the fast pace wasn't much of a surprise.  I liked that Luke walked the border between Alpha and bashful and the reasoning behind why made sense.  I liked that Luke accepted Lena and all her kinks without batting an eye and he pushed her to try things she hadn't really considered.

It was sexy and hot and there was that whole sex with monsters thing.  Yeah.  If you're into that, this is totally the book for you.  I am into that.  In a literary sense.  Mostly because I don't know any honest to goodness monsters.  'Cause if I did?  Who knows.

Disclaimer: As an Amazon Associate, I earn from qualifying purchases.
Posted by Kelly Rubidoux at 7:43 PM