Review: Hammer Down (Children of the Undying #2) by Moira Rogers 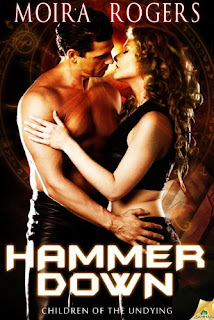 
When hell reigns on earth, love is a luxury they can't afford.

Children of the Undying, Book 2

While the tattered remains of humanity huddle underground, hiding in their virtual world, Devi prefers living topside, making dangerous hauls through the demon-infested wasteland earth has become. The wealth that comes from smuggling supplies to those shunned as summoner-born or demon-touched doesn’t hurt, either.

The man she meets to arrange one of those under-the-table hauls is complicated…and handsome as hell. Literally. A glimpse of the predator beneath his silver gaze and she’s tempted to break her cardinal rule: never mix business with pleasure.

Zel’s first look at the wild-haired hauler threatens to distract him from his mission—and reminds him just how long it’s been since he got laid. As the leader of an outcast settlement, he can’t afford to trust too easily. Devi’s got a reputation for running a tight, disciplined crew, but her very willingness to deal with him means she has something to hide.

Not to mention a hot, tempting package like her could be the cleverest trap his enemies have ever set.

Warning: Contains demon bars, virtual (and literal) fights to the death, forbidden love, renegade AIs, a badass truck-driving heroine who will do anything to protect her crew and the half-demon warrior who will move heaven and hell to make her his.

My Thoughts: *stares at the computer* *attempts to gather thoughts* *stares some more*  This is a darn hard book to write about.  There is so much awesome. SO MUCH.  And it's all over the place as far as genres go.  In an entirely good way.  It has the post-apocalyptic things going on.  It has a touch of paranormal romance/urban fantasy.  It has demons and ... truckers?  AND IT WORKS!  IT WORKS LIKE SOMETHING THAT WORKS REALLY WELL!

Zel and Devi have definite, undeniable chemistry.  He wants her but he has a passel of people looking to him to keep them safe.  She wants him but she has a rule about getting involved with those she works with.  Circumstances throw them together and they fight the attraction for all they're worth.  It's a lost cause, as you can well imagine, but they don't give in easily.  It is a sweet ride, let me tell you.

The secondary characters are fabulous.  I am so intrigued by the secrets they keep and stories that can be told there.  The post-apocalyptic setting is wonderful.  This book was the perfect blend of broken cities and worn down people trying to make the best of a bad situation.  Zel's settlement is overcrowded and teetering on the edge of self-implosion.  Zel is a strong leader but while most of his people believe in his vision for the future, they think he's going about it the wrong way and it's causing tension.  Zel is both strong enough and smart enough to find ways to make things work but it's touchy and Devi's presence doesn't help matters.

A truly fantastic genre-crossing read that blew my socks off.  Moira Rogers has crafted a world that stretches the imagination and keeps you glued to its pages.  Fabulous, dark, wonderful and kick-ass!  More, I say. I WANT MORE!

Other reviews in this series
Book 1: Demon Bait

Disclaimer: As an Amazon Associate, I earn from qualifying purchases.
Hammer Down was provided for review.
Posted by Kelly Rubidoux at 6:03 PM