Review: The Wood Queen (The Iron Witch #2) by Karen Mahoney 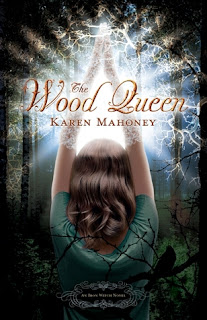 
Donna Underwood is in deep trouble.An ancient alchemical order is holding her accountable for destroying the last precious drops of the elixar of life. Never mind the fact that Donna was acting to free her friend, Navin, from the dangerous clutches of the Wood Queen at the time. But what the alchemists have in store is nothing compared to the wrath of the fey. The Wood Queen has been tricked and Donna must pay. Get ready for all hell - quite literally - to break loose...

My Thoughts: I'm really torn on this book. I liked the world Karen Mahoney created with the first book and I was very excited to step back into it but... I don't feel like a lot happened here until the very end. The first half of the book moved very slowly - we had the trial and... Donna finding out that people have been lying to her and... uh, well, her mom took a turn for the worse but I kept waiting for something more to happen and it didn't. Speaking of which, didn't we already know that the Order was shady? It's been a while since I read book 1 but I seem to remember that there were more secrets than you could shake a stick at. Yet, Donna kept acting surprised when more of these secrets bubbled up.

Speaking of which, is there anyone in the magical/alchemical world that Donna can trust? I mean, her Aunt goes back and forth between being an Order stoolie and seeming to try to help Donna. Maker has been keeping secrets from her. Actually, I'm not quite sure where her distrust of Xan is coming from. Yeah, he didn't tell her about a former (possible) lady friend but in all honesty Donna never asked either. Is it really fair to paint him with the mistrusting brush in this case? I'm just not feeling that.

After writing all this, I'm still torn. I do think that several of the things that happened here are pivotal to what's to come but I had a tough time wading through this book. Donna was separated from her friends in the beginning and it lent an air of disconnection that I never really shook. Even when Nav and Xan got looped back into her life, Donna kept trying to keep them safe by not involving them.

While I think this book will prove to be a major turning point in the series, I'm wasn't as enamored of it as I was of the first.

Other books in this series
Book 1: The Iron Witch

More books by Karen Mahoney
Posted by Kelly Rubidoux at 6:30 AM