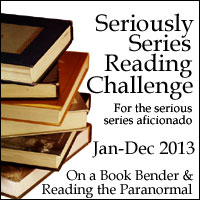 (This post can also be found at Amanda's blog - don't be alarmed, we collaborated on it!)
General Overview

How serious about series are you? We'll find out in 2013.

In the summer of 2012, Amanda and I hosted an informal challenge that focused on completing books in series that we owned. It was enough of a success that we decided we wanted to turn it into a year-long challenge--with a few minor changes. To start with, we have expanded on our original challenge by including both ongoing series and adding new-to-us series, as well as an option for series rereads for those that are VERY serious about their series (or for those that just like to go back and reread old favorites).

For this challenge, we define a series as a collection of two or more books that belong together and where the second book is published before the end of 2013. This is a pretty broad definition of series, and it includes traditional series like the Black Dagger Brotherhood series, less traditional series like Stephanie Perkins's YA contemps (Anna and the French Kiss, Lola and the Boy Next Door), and shorter series, like Kendare Blake's Anna series (Anna Dressed in Blood, Girl of Nightmares).

You choose which categories you want to attempt and which level to shoot for. Reading novellas and short stories from a series does count here.

Want to sign up? Create a post or page about this challenge, what goals you would like to accomplish (mine is here, as an example), and then link up your post here at Reading the Paranormal. I will be hosting all of the linkies for this challenge. In addition to the sign up, every three months, we will post a check-in, where you can report your progress and reassess your original goals. That schedule will look like the following:
Ready to sign up?