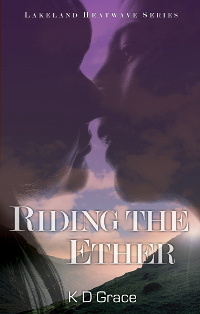 
Cassandra Larkin keeps her ravenous and dangerous sexual appetite secret until she seduces Anderson in the mysterious void of the Ether. Anderson is the sexy, insatiable ghost who can give her exactly what she needs. But sex is dangerous in a place like the Ether...

When the treacherous demon, Deacon, discovers the truth about the origin of Cassandra’s powerful lust, he plots to use her sex magic for revenge on Tara Stone and the Elemental Coven, who practice their own brand of sex magic. Cassandra must embrace the lust and sexuality she fears and learn to use its power.

Will she stand with Anderson, Tara, and the Elemental Coven against Deacon’s wrath or suffer the loss of friendship, magic and love?

My Thoughts: Oh, hey! Sexy read, here. No lie. There is sexin' of the multiple variety going on within these pages. Multiple meaning that you get guy on guy, girl on girl, guy on girl, guy on guy on girl, girl (being forced by a demon to do things she wouldn't normally do) on guy... and, well, pretty much any combination you can think of. It's exhausting. In a good way.

Anderson and Cassandra had some serious steam. Cassandra's abilities make her deadly and she's had to reign herself in for so long that when they come together things start smoking. Lest you think this book is all about the sex, it's not. In between bouts of loving (and self-pleasuring, if the situation calls for it), the two of them - along with the rest of the coven - have to figure out what's going on with the diabolical Deacon and how to put him for good. Deacon's crafty and very bad and he does his best to keep ahead of them at every turn.

I like the people who are slowly orbiting into the coven's world. Cassandra, who brings along Ferris and a whole host of questions about her father. Alice and Serina who have both been abused by Deacon in his lust for power. Not all of them stick around, but it's interesting to see how they fit in when they're there.

Books in this series
1. Body Temperature and Rising
2. Riding the Ether - Kindle

Disclaimer: As an Amazon Associate, I earn from qualifying purchases.
Riding the Ether was provided for review.