A Rogue by Any Other Name by Sarah MacLean [Review] 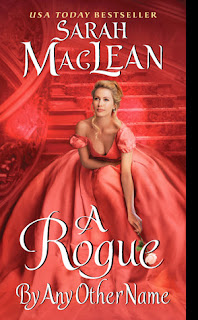 A Rogue by Any Other Name (The Rules of Scoundrels #1) by Sarah MacLean
Format: paperback
Source: library
Date read: January 3, 2014

The Rules of Scoundrels
1. A Rogue by Any Other Name - Paperback | Kindle
2. One Good Earl Deserves a Lover
3. No Good Duke Goes Unpunished
4. Never Judge a Lady by Her Cover

A decade ago, the Marquess of Bourne was cast from society with nothing but his title. Now a partner in London’s most exclusive gaming hell, the cold, ruthless Bourne will do whatever it takes to regain his inheritance—including marrying perfect, proper Lady Penelope Marbury.

A broken engagement and years of disappointing courtships have left Penelope with little interest in a quiet, comfortable marriage, and a longing for something more. How lucky that her new husband has access to such unexplored pleasures.

Bourne may be a prince of London’s underworld, but he vows to keep Penelope untouched by its wickedness—a challenge indeed as the lady discovers her own desires, and her willingness to wager anything for them... even her heart.

Thoughts on A Rogue by Any Other Name: Oh, mah goodness. Sarah MacLean can certainly bring her characters to life, can't she? She tied me up in knots with Penelope's sad longing to hold out for something *more* than a loveless marriage. Her guilt over her sisters' marriages to men they don't love after her scandal (which was not at all of her making, mind you) slayed me.

Frankly, there were times when Penelope's mother and sister Olivia enraged me. While Penelope was accepting of her mother's hysterics about how Penny had "ruined" the other girls' chances, the words cut. Olivia, as the spoiled, beautiful daughter, was brutally tactless at times. It was hard to read. It was hard to watch Penelope gamely holding out for more than a typical marriage when she was constantly being told how lucky she'd be if ANY man was willing to marry her.

Enter Bourne, who's totally committed to vengeance and is willing to use Penelope to further it. Ouch, Bourne. Ouch. Good thing Penelope wears him down and shows him that some things are more important than extracting his pound of flesh.

As much as I liked this book and getting to see how Penelope's fared since Simon and Juliana's book, I'm wickedly excited for Pippa and Cross's story. Those Marbury girls aren't very good at staying out of trouble and I, for one, love it.