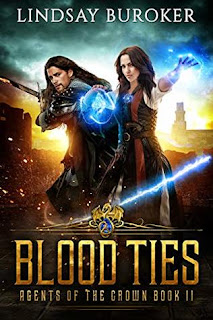 
Recently appointed Crown Agents Jev and Zenia must prove that they're worthy of their new jobs and young King Targyon’s trust.

To research the strange “disease of the blood” that killed Targyon’s three cousins and left him unexpectedly ruling an entire kingdom at barely twenty years of age.

There are just a few problems. If someone was responsible for creating that disease, that person could still be in the city, forcing Zenia and Jev to deal with someone very smart and very dangerous. Meanwhile, since Targyon has the same blood flowing through his veins that his cousins had, he’s at risk of becoming the next victim. And as it so happens, Jev shares some of that blood too. Might he become a target before Targyon?

When Jev and Zenia signed on for this job, they didn’t realize how deadly it might become.

Thoughts on Blood Ties: I kinda broke one of my cardinal rules of reviewing with this series and I don't even feel mild shame for it. What's that? you wonder. Wellllllll, I sort of read this book before writing my review for book 1. Which is a no-no in Kelly's world. Sometimes you gotta break the rules, though. I did. It's fine. Let's move along.

So. Jev and Zenia are officially working for the king. They've got a lot of experience between them, but it's not all smooth sailing. They're working off hunches and half-formed ideas and...well, it all works out in the end, but it's a bit of a bumpy ride from point A to point B.

Also, these two like one another, but social strictures seem determined to keep them apart. Which sucks, man. Sucks. (Although the social side of it seems to bother Zenia more than Jev, but Jev also has some familial obligations to live up to. The upper class do have some not-so-fun expectations, don't they?)

Mad scientists, angry guard dogs (of a sort), a little simmer of sexual tension, and danger. Because what sort of Agents would they be if they didn't go barreling into tense situations regularly?