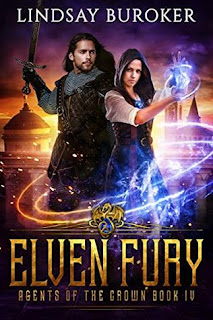 
Jev Dharrow is trying to convince his father to cancel his arranged marriage so he can wed Zenia, the woman he loves. But when elven assassins arrive in the city, all his personal problems must be set aside.

They are after his good friend, Lornysh, an elf who has saved Jev's life a dozen times over the years. The assassins consider Lornysh to be a traitor to their people, and they’ll kill anyone who stands at his side. They wield great magic as well as their swords, and they have the power to destroy half the city as they chase after their target.

With the arranged marriage looming and elven assassins on the warpath, Jev is running out of time to save his friend—and his own future.

Thoughts on Elven Fury: Okay, yeah. So not only does Jev have to deal with assassins and other manner of dangerous shenanigans, but his father has broken his word about giving him time to find a wife and has arranged a marriage with a girl still in her teens. Which, ewww. Plus, her mom is kind of a jerk and I'm not okay with arranged marriages, as it turns out.

Let's get back to those assassins, though. They aren't just assassins. They're highly trained Elven assassins and they seem to be gunning specifically for Lornysh. Seeing how Jev likes the guy despite his surly attitude, he's not okay with someone (or several someones) trying to kill him.

As you might expect, he throws himself (and Zenia) into the middle of things.

A little danger. A lot of snark. A WHOLE lot of longing looks. Some head bashing. A few unexpected revelations. All in a day's work for the agents, amirite?!?!