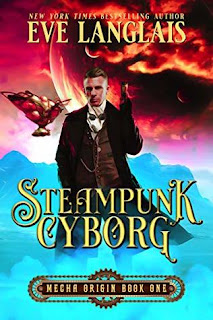 
When a friend drags Agatha “Aggie” Bowles to a romance convention, all she wants to do is find some new authors and a quiet spot to read. Instead of relaxing with a book, she ends up kidnapped by a steampunk cyborg.

Which is as exciting as it sounds.

Except for the fact he’s more interested in the cog hanging around her neck than Aggie herself. He’ll do anything to get his hands on it. Problem is other people want it, too.

Can this cyborg relinquish a priceless treasure for love?

Thoughts on Steampunk Cyborg: Wonderfully arrogant cyborgs and the ladies who put their gears in a twist (although sometimes the ladies are cyborgs themselves, but that's another story for another day) are the THING I've been craving. Jwls certainly has the arrogant part down. To be fair, he does have some stellar upgrades and, by most of the universes' standards, Earthlings are kind of backward. Not to mention, the planet is in the far end of nowhere, so not many people (augmented or otherwise) go there.

Basically, in the eyes of the universes, Earthlings aren't just backwards, they're country-bumpkin backwards with no clue what's past their atmosphere.

I have to say, that doesn't stop Jwls from liking what he sees when he abducts Aggie (for her own good) and stashes her away on his spaceship. Aggie, being an enterprising Earthling, does her best to drive Jwls crazy and freeze up his gears every chance she gets. Jwls, being an arrogant cyborg, doesn't realize how effectively Aggie's inserted herself into his space until he is faced with giving her up.