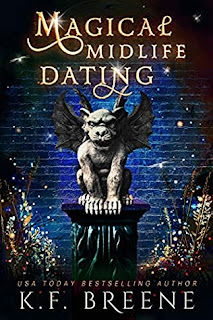 
She must learn to fly, but can she withstand the allure of the handsome new teacher?

The decision has been made. Jessie has taken the magic, and all the weird that goes with it. Including wings.

There's only one problem - she can't figure out how to access them.

Through a series of terrible decisions, Jessie realizes she must ask for help. Gargoyle help.

But she could've never predicted who answers her call - he's an excellent flier, incredibly patient, and a good trainer. He's also incredibly handsome. And interested.

Except, the new gargoyle is also an alpha, just like Austin, and the town isn't big enough for two.

Turns out, flying is the least of her problems.

Thoughts on Magical Midlife Dating: Jessie's working on uncovering new facets of her magic and the magic of Ivy House (and doesn't THAT come with a few surprises?!?!) and she's... I'm going to say she's not quite in the right headspace yet. She understands what she needs to do, but she doesn't quite see herself as the person capable of doing it. Impostor syndrome. BLECH.

Number 1 on her to-do list is finding her wings and learning to fly. Literally. And she's not doing so great at that one. She's called a horde of gargoyles to her to supplement the current trio helping her out and things are getting interesting. Interesting and innuendo laden. (Because gargoyles aren't very inhibited and they like slinging the innuendo.)

Townside, Austin is still fighting the pull Ivy House is putting out and that's putting a bit of a strain of Jessie. Because he's still her #1 pick to stand by her side, but she won't force him into a position he doesn't want. (The guy has some commitment issues, doesn't he? He won't commit to being the town Alpha even though he clearly is and he doesn't want to get dragged into Ivy House's craziness. Which, given that Jessie is part of Ivy house now, seems like a battle he isn't going to win.)

Dastardly plans, a few scares, dolls that come alive, and a couple of AWFUL dates. Being a former non-magical person thrust into the world of magic is already sending Jessie's head spinning. Internet dating? EVEN WORSE.