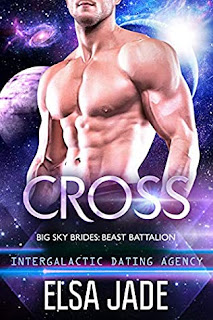 Tyler Lang took the offer for a data-processing job in Sunset Falls, Montana—“Big Sky Country: Where the stars are close enough to touch!”—as a chance to escape a humiliating breakup. Mr. Evens’ Odds & Ends Shop sounded like a great place to hide and focus solely (meaning ALONE) on her beloved numbers. Except she’s constantly distracted by the looming presence of the shop’s weirdly hot security guard. What kind of thrift store in the middle of nowhere needs protection? Not to mention a guard literally hot enough to make her computer smoke. These numbers just aren’t adding up.

As captain of his banished beast battalion, Wyvryn Cross will take any job that keeps his fighters free from intergalactic incarceration. He’ll even work for a devious Dirter who claims to be reopening a defunct Intergalactic Dating Agency outpost on Earth. Cross doesn’t believe in a “universal mating algorithm”…until his smoldering gaze alights on the shy female who doesn’t know anything about aliens on Earth and doesn’t even realize she’s writing a love code. Unfortunately, suddenly smoldering eyes are a bad sign in a Wyvryn.

They should just do their jobs and go their separate ways, but when a mysterious saboteur tries to shut down the Intergalactic Dating Agency before it opens, Tyler and Cross must work together to perfect her code. Even if that demands some hot kisses under the bright Montana stars.

Thoughts on Cross: I must say, I do tend to enjoy Elsa Jade's aliens. They're just so ridiculously charming even when they're grumpy and terse.
Cross is honorable and determined and having a clueless-about-aliens-on Earth human brought in on Evens' special project does NOT sit well with him. Never mind that she soothes his beast. Never mind that he knows they need her genius brain if they ever expects the matchmating algorithm to work. She doesn't know about aliens and that makes her a threat.
Well, not a threat, exactly, unless you count the threat to his beast and his heart. And, really, his beast is more than happy to roll over for Tyler, so that one's a non-issue.
As for Tyler, she's trying to salvage her pride and her career after getting out of a bad situation. She needs honesty to feel comfortable moving forward with things and that's one thing Cross can't give her seeing as he's an alien who shouldn't be on a closed world. Well, he can't give that to her until, you know, he can.
A little steam, a few kisses, a smart woman who isn't going to blindly follow ANYONE even a sex-on-a-stick hunk with a nice butt. Oh, and IDA. Evens is determined to get the dating agency up and running again no matter what obstacles are thrown in his path.