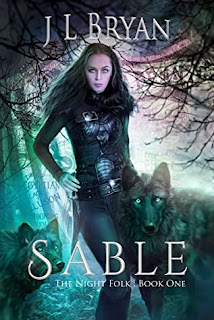 Sable (The Night Folk #1) by J.L. Bryan
Format: ebook
Source: provided for review
Disclaimer: As an Amazon Associate, I earn from qualifying purchases.
Date read: May 15, 2022


I'm Alice, a werewolf slayer, though not really a great one yet.

Born with the wolf curse, I was trained by a secret ancient order to hunt the most dangerous lycanthropes, those who relish violence and murder. The order also provides the critical drug cocktail that keeps my inner beast under control...most of the time.

When my rebellious, impulsive nature leads me to botch an assignment, the order sends me into a kind of exile. My new assignment is to follow up on faint rumors of lycanthrope activity in small, fairly remote Rust Belt cities of Michigan. I'm supposed to set up quiet listening post to gathering information, though being quiet has never been one of my strong points.

Now I find myself isolated, establishing a new deep-cover identity, searching for a day job and a place to live in a new city. I struggle to build relationships with actual normal people who are neither shifters nor slayers. I feel like I've lost my home, like an unwanted wolf shunned from her pack, my trusted community lost along with their trust in me.

My new, almost normal adult life won't last, either. Beneath the illusion of a regular life that I try to create, my past is always stalking me, even as I stalk the local werewolves. Learning about my enemies, I learn about myself, and soon I'm torn in different directions by the different worlds in which I live, and by my heart, soul, and sense of duty, as I search for the right path in the shadowy world of the night folk.

Thoughts on Sable: Whoo-boy. Alice is...well, she's a little messed up. I don't exactly trust the Order (because they come across as the cultiest cult that ever culted) and Alice's indoctrination into their ranks was ROUGH (a good time was not had by all, in my opinion). Then to cut her off like they did, basically abandoning her under the guise of "learning to fit in with the natives" messed with her head. Although, to be fair, Alice really did need to learn how to fit in with the normals.

But she's also not the monster she's been told she is. If her young adulthood hadn't been like it was (squirreled away in an old monastery and trained to fight, fight, fight) maybe (jussssst maybe) she'd have a better handle on herself. Squashing down a side of yourself and doing everything you can to pretend it doesn't exist is not a healthy way to live and Alice has been forced to leash her beast pretty much from the time it showed itself.

While it was seriously traumatizing for Alice to be ejected from her perceived pack, it was also probably the best thing for her. Especially since she got to see the other side of how werewolves act. The non-violent side. The run-through-the-forest side. She's a mess, but she's learning. And she's breaking away from the mindset her trainers have drilled into her.

I have no idea if Nick is exactly what he seems or if there's a whole lot more beneath the surface, but I like that he's making Alice take a long hard look at the things she's been told. Where will things go from here? NO CLUE. But I'm here for the ride.