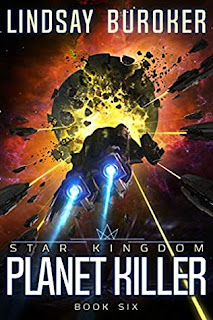 
Casmir has survived against impossible odds, and now he longs to return home. But an invasion force is blockading the Kingdom’s wormhole gate, and it would be suicidal to fly through it now. Worse, his family and friends are stuck on the other side, with hostile forces attacking their home world.

The only way Casmir can help is to find out who’s behind the invasion… and convince him to stop.

But Casmir isn’t known for his ability to strong-arm people, and this is one enemy who won’t be won over by his friendly demeanor. As he soon finds out, he must face the very rich and very powerful person who’s been trying to have him killed for months.

Thoughts on Planet Killer: Yikes. Things are getting a little hairy (not literally, as it turns out) for Casmir and his gang and both he and Kim are expected to do their part to help the Kingdom win the war that's coming. Even though the things they're expected to do go against everything they both stand for.
So what does Casmir do in this situation? He improvises, of course. And makes friends in unexpected places. His ability to charm people with his genuine desire to help others is almost as well-developed as his ability to create robots out of a handful of parts.
That said, Casmir has a lot of information that doesn't quite fit together yet. His quick mind can often see a way out of a situation that others don't expect, but when he's working from incomplete data and his own rulers are just HORRIBLE, it's hard to stay one step ahead. I really can't stress this enough, with the exception of Oku (and possibly her mother, who I have not yet formed a firm opinion on), the royal family on Odin is absolutely awful. Starting with the king and working on down through Oku's brothers. Terrible people.
I can't wait until Casmir shows them what's what. (Which is something I fully expect to happen, one way or another.) Until then, I shall cross my fingers and continue hoping for the best!