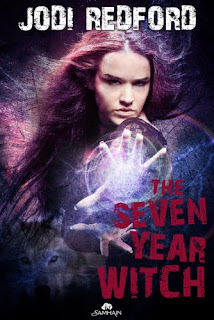 
After this much foreplay, something’s bound to combust.

But her resolve is vanishing—fast. Seven years ago she sold her soul to save her father, and that contract is coming due. The allure of spending her last days indulging in some dirty, naked loving is too tempting to resist.

Logan has patiently ridden out the past seven years, content to do Clarissa’s bidding and ignoring his consuming need to mark her as his. Now that the ban on witch/familiar fraternizing has been lifted, he’s off the leash and ready to launch a full-on sensual assault on her defenses. They’re destined mates, and he’ll do whatever it takes to convince her.

It’s delightfully easy to get her in bed. Get at her heart? Not so much. Especially when a deadly predator stakes its claim on her…and Logan faces a battle not only to win her heart, but save her soul.

Warning: This book contains a villain with more personalities than Sybil, a witch in search of redemption and a dirty-talking werewolf hell-bent on claiming his mate in every wicked, sexy way possible. Spontaneous howling may occur.

Clarissa was... well, I won't say that I disliked her when she was introduced in book 1 but she was a hard character to actually like until you got to see what caused her to don the ice queen mask.  She was just so broken by what was coming for her.  She fought against it, but she always had the idea in the back of her head that it was inevitable.  The way she tried so hard to protect those around her (her coven sisters, Logan, her father) while she was watching the clock tick down on her time made her wonderfully sympathetic.  Throwing in the towel and having a torrid affair with Logan simply because she could no longer deny the way he made her feel was sexy.

And Logan. Wow.  He was hot and perpetually horny.  I loved that he was so unrepentantly arrogant and male.  I loved his musing about how Clarissa would bring more to any relationship than he would so he'd just have to become a champion diaper changer to make up for his lack.  How can you not love a guy who sees his faults in such a clear light?  Sure, at the end of the day he was still an arrogant, Alpha werewolf with a penchant for innuendo and taking his clothes off at the drop of a hat, but he was so damn consistent about it that I couldn't help but fall for the guy.

As for the bad guy... well, I loved to hate him.  More to the point, I loved what he was and how he was portrayed.  In fact, I pretty much thought all the secondary characters were fabulous.

If you're not reading this series and you like witches, werewolves, demons, and/or various other supernatural entities, you're missing out.  I loved the book from beginning to end and I'm waiting breathlessly for book 3.

Other reviews in this series:
Book 1: That Voodoo You Do