Review: Beneath the Neon Moon by Theda Black 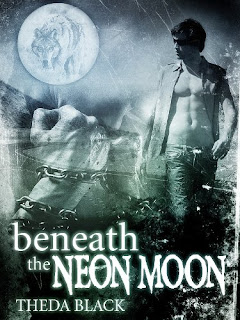 
Zach's lived a rough life, but it taught him how to take care of himself. Until now, anyway. He's alone, he's lost his job and the rent's coming due. He thinks he knows what bad luck is. He doesn’t.

Mal's the golden boy who had it all in high school. Then he threw it away. Now he's back on track, working his way through college and looking toward the future - until he attracts the attention of the wrong group of people.

They’ve never met. Then one summer night everything changes. Suddenly they’re in desperate trouble, trapped and bound together in darkness. And in less than forty-eight hours, one of them is going wolf.

My Thoughts: I thought this was a very intriguing and interesting take on the werewolf myth.  There were a few times where I wondered how things were going to end up and I kept imagining the worst.  I like it when a book makes me go all wide-eyed and gaspy.

Admittedly, the beginning of the book threw me.  I can't exactly pinpoint why except that I think I thought it was going to go in a different direction than it did.  Which is silly because the synopsis up there is pretty darn accurate.  I just sometimes... don't pay attention or something.  Once I got my head on straight, I ended up really liked Zach and Mal's story.  They're trapped, they don't know one another, they have no reason to think they're going to come out of this in one piece and they slowly find themselves falling for one another.  Considering the setting, it was oddly sweet and hopeful.

Zach's history is compelling and it deepened the story exponentially.  Without his tough past, I don't know if I would have been as invested in how things played out.  Overall, I was pleasantly surprised by the path we took to the end and I'm looking forward to reading more by Theda Black.

Disclaimer: As an Amazon Associate, I earn from qualifying purchases.
Posted by Kelly Rubidoux at 7:06 AM